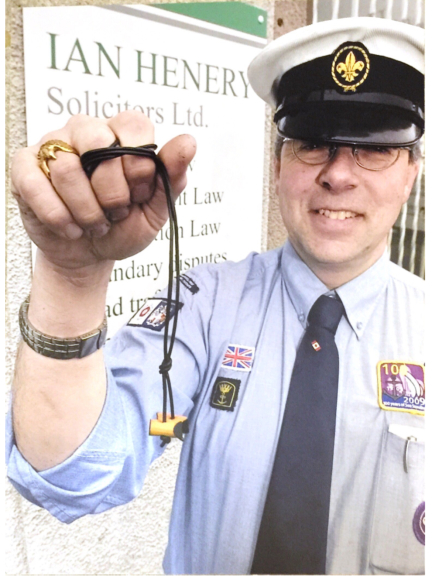 A solicitor from Walsall has earned a top Scouting award following his training in Wolverhampton so that he can be equipped to deliver on brand quality Scouting in Sutton Coldfield and Birmingham.

The award, simply known as the coveted "Wood Badge", originates from 1888 in South Africa.  Solicitor Ian Henery claims that he did it all in memory of his father as a method of beating his bereavement when he joined the Sea Scouts in Walsall and Sutton Coldfield.

"My Dad was a Scout all of his life", said Ian "and the big event that marked his life was the 1957 World Jamboree in Sutton Park.  Her talked about it right up until the end of his days and wore a woggle around his cravat that an American Scout gave him at the Jamboree".   Ian`s father, John Henery, had been in the Royal Air Force and was an Assistant Scout Leader with the 1st Syerston Air Scouts in Nottingham.  When he left the Royal Air Force he dedicated himself to Scouting and youth work, eventually working as an Education Welfare Officer for Walsall Metropolitan Borough Council.

"He nearly didn`t go to the World Jamboree" said Ian "because the Royal Air Force would not release him as his tour of duty had not ended.  He needed special dispensation from the Air Commodore.  He took great pride in the Wood Badge he earned in 1955 by completing Scouting`s premier training course".

The Wood Badge was first awarded in 1919 following the first Scout leaders` training camp at Gilwell Park in Epping Forest.  The camp was designed and run by Lord Baden Powell, the founder of the World Scout Movement, a 61 year old retired general in the British Army.  At the conclusion of the camp he gave each Scout leader a simple wooden bead from a necklace he had found in a Zulu chieftain`s hut when he had been on campaign with the British Army in South Africa.  Wood Badge recipients now number over 100,000 and can be found in all corners of the world.

"My Dad grew up in a mining village near Durham" explained Ian "and the Royal Air Force and Scouting opened up his world.  He dedicated his life to the core principles of the Scout Association and became part of a worldwide community.  Whilst on leave from the Royal Air Force he hiked throughout Europe wearing his Scout uniform and - for a lad from his background - this was a huge adventure".

The Wood Badge is a Scouting programme and award for adults in the Scout Association around the world.  The course leading to the Wood Badge is designed so that adult Scouters can learn, in a practical way, the skills and methods of Scouting.  On completion, Scouters are still awarded the beads to recognise the significant achievement in leadership and direct service for young people and to welcome them into the world`s first Scout troop, the 1st Gilwell Park Scout Group.

"Although the programme has changed over the years, the essence of the original Wood Badge still remains" said Ian.  "Adults use the new knowledge and skills to complete training which is designed to strengthen the individuals and the Scouting they are providing to young people".

When the original Zulu beads ran out, new ones were whittled out of a branch that had fallen from an oak tree in Gilwell Park to maintain the tradition established by Lord Baden Powell.  They came to be known as the "Wood Badge", considered by many as the peak experience in their Scouting career." They have served as a source of training inspiration to thousands of Scouters across the world" said Ian "who have then gone on to affect the lives of the world`s youth".   As Ian`s Dad lay in his coffin, Ian placed in his left hand his Wood Badge and woggle and in his right hand a cross his children had made their Grandad.

"This is the way he entered Heaven" explained Ian.  "He believed in God all of his life and had spent some time living in a friary in Dorset.  He died with a smile on his face.  My Dad, at the end, saw the Gates of Heaven swing open to receive his soul".

In memory of his Dad Ian joined 3rd Walsall Sea Scouts, training at West Mercia County Headquarters in Wolverhampton and Kibblestone International Scout Camp in his spare time before joining Sutton Coldfield Sea Scouts in Birmingham County.  "To complete the Wood Badge takes, on average, 18 months" explained Ian "but I made history by completing it in 6 months.

I did it all for my Dad, to follow in his footsteps and to deal with my bereavement.  Somebody once said to me that "remembrance is love`s last gift".  I like that quote".   What sustained Ian were the lines of this poem:   "Those we love don`t go away, They walk beside us every day: Unseen, unheard but always near Still loved, still missed - and very dear".

The Wood Badge is more than just completing a mechanical course but the embodiment of Scouting spirit.  In the context of Scouting`s ideals and serving young people, it promotes a deep community and fellowship for those completing the course.  "If it were not for the common goals and core values of Scouting" said Ian "and it`s programme for young people, it would be hard to get men and women to endure an intensive and gruelling programme that is the equivalent of a degree course".

Scout Leaders give up their time for free.  The whole movement is voluntary and completing the course is designed to be a highlight - a "mountaintop experience" - begun long ago by Lord Baden Powell in 1919.   "What I have is a certificate signed by the TV adventurer Bear Grylls, the Chief Scout and a badge of wood on a leather boot lace" Ian said "but that is not all.  It is a symbol of training backed by the finest thought and tradition of Lord Baden Powell and carries with it great prestige."

Ian maintains that the Wood Badge is a great force of world unity and peace because it emphasises the international aspects of Scouting and the heritage of Lord Baden Powell and Gilwell Park.     Sea Scouting began in 1908 one year after the establishment of Scouting itself and during the First World War Sea Scouts performed duties as coastal look outs and messengers and, in recognition of those deeds, were formally recognised by the Admiralty Board in 1919 which allows them access to Naval equipment and facilities whilst remaining independent of any Naval control.

During the Second World War the scheme  was converted so that Sea Scout groups who could show themselves able to reach certain levels of proficiency could apply for grants to help train young people in basic seamanship.  The scheme, called "Royal Naval Recognition", has been running since and is overseen by the Second Sea Lord/Commander-in-Chief Naval Home Command and regulated between the Ministry of Defence and the Scout Association.

Although there are approx. 425 Sea Scout Groups in the UK the Royal Navy only recognises 101 and in order to remain in the scheme each Scout Group must maintain high standards.  The driving force behind groups applying for and remaining in the Royal Navy Recognition Scheme is the kudos and associated pride.

As well as the 33,000 participants from 85 countries there were an additional 17,000 British Scouts camping on sites around Sutton Park and attending the daily organised events making a total of 50,000 Scouts in Sutton Park.  In addition, there were a further 7,000 Scouts being bussed into Sutton Coldfield from troops all over the UK for day-long visits spread over the 12 days of the Jamboree which was formally opened by HRH Prince Philip, Duke of Edinburgh and the British Prime Minister Harold McMillan.

"I could not imagine so many Scouts in one place" said Ian "and messing about on boats in Sutton Park with the Sea Scouts brought me full circle."   On the Centenary of Sea Scouts Ian went on his first jamboree to the National water Sports Centre in Nottingham with 3rd Walsall Sea Scouts.  In the spirit of the world-wide fellowship of Scouting Ian was presented with an American Sea Scout Centenary badge to mark the Jamboree by Sea Scouts from California.   "It was like my Dad`s American woggle" Ian said "and the American Native Indian tent he was given at the World Jamboree in Sutton Park by an American Scout.  We played in that tent in my parent`s back garden as children.  My Dad would always point to the tent and his woggle and say "this came from American Scouts at the World Jamboree in Sutton Park".  I could not understand it then but I certainly understand it now".

Ian maintains that his Sea Scout Jamboree leather woggle and neckerchief mean more to him than the TV celebrity signature on his Wood Badge certificate.  "Chief Scouts are very important" said Ian "but I have never met Bear Grylls.

As fireworks exploded over the Sea Scout Jamboree I dedicated everything I had achieved to my Dad and wept on the banks of the Olympic size rowing lake because I miss him.

Now, whenever I look at myself in the mirror in my uniform, wearing that Wood Badge, it is my Dad who is smiling back at me."