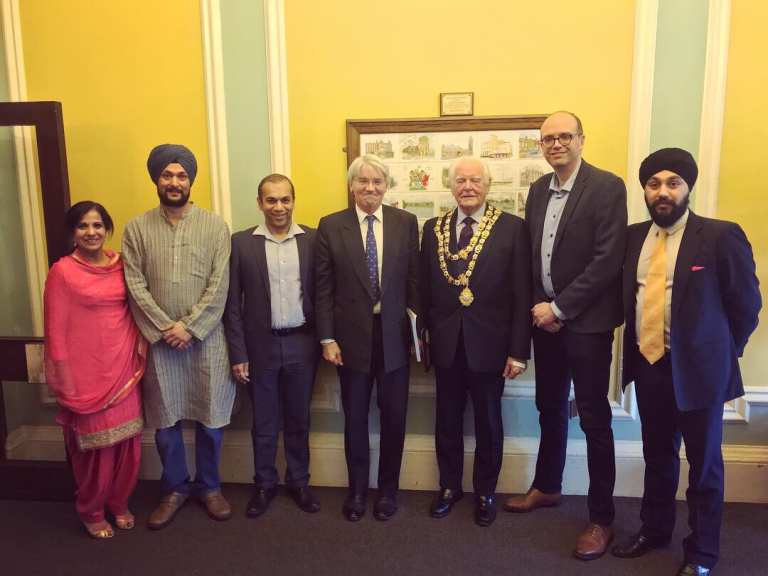 Last weekend Andrew Mitchell MP Andy Street spoke at the Town Hall to celebrate Vaisakhi, a historical and religious festival in Sikhism which also marks that beginning of Punjabi New Year. Hosted by the group & Sikhs of Sutton Coldfield & this was only the second year ever that Vaisakhi has been celebrated in Sutton Coldfield.

The hugely successful event, for which tickets had sold out for, included a Punjabi Folk Festival which had various exciting performances such Punjabi folk songs, dances and folk musical instruments such as Bhangra & Gidda dancers and Dhol drum players.
Andrew Mitchell started off the celebrations with a short speech that highlighted the two important events that Vaisakhi marks in Sikh history; It is the Birth of the founder of Sikh religion Guru Nanak, and is the day the 10th Guru, Guru Gobind Singh handed over the spiritual authority of Sikhism to a body of his followers. In particular 2019 marks the 550th birth anniversary of the Sikh founder, Guru Nanak.

Andrew Mitchell then went on to say how the 13 April also marked the more somber centenary of the Jallianwala Bagh Massacre at Amritsar, where troops commanded by the British Officer, General Dyer, opened fire on thousands of unarmed peaceful Indian protesters killing at least 400.

At the event, Mr Mitchell referred to words spoken by Winston Churchill a few months after the massacre when he said “an episode which appears to me to be without precedent or parallel in modern history of the British Empire… It is an extraordinary event, a monstrous event, an event which stands in singular and sinister isolation”. Andrew Mitchell MP, who recently co-signed a cross-party letter to the Secretary of State for Foreign & Commonwealth Affairs calling for the Government to take this opportunity to offer an official apology, said following the event:

“I am delighted this important celebration is being held in our Town Hall here in the Royal Town and that it is so clearly such a success as we have seen tonight. The Sikhs of Sutton Coldfield are a most important part of our local community.”

Andy Street said, “I am delighted to be back in Sutton Coldfield for this event.”