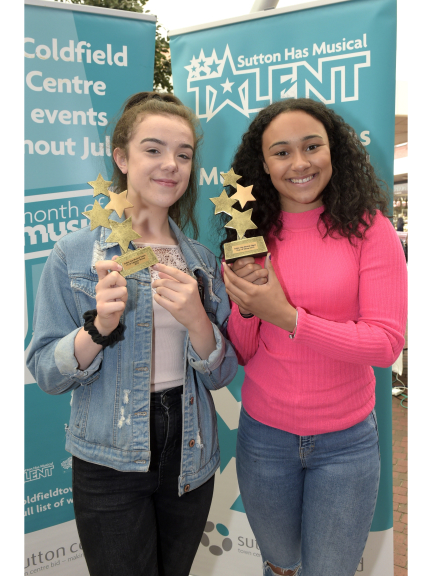 Rising stars of the Royal Town took to the stage on Saturday to be in with a chance of being crowned winner of the annual Sutton Has Musical Talent competition.

Amelia Waldron, aged 14, was the triumphant winner of the 13 to 18 category after performing ‘Stay’ by Rihanna and her own composition titled ‘Prove It.’

Amiyah Goodall, aged 18, scooped the prize for the over 18 category and was crowned the overall competition winner, thanks to her rendition of ‘Yours’ by Ella Henderson and ‘When We Were Young’ by Adele.

The talented winners won the incredible prize of a day at local recording studio, Priory Studios, where they can record, mix and master a song, as well as a host of vouchers to spend throughout town centre venues and retailers.

Now in its third year, the competition comes as part of Sutton Coldfield’s popular Month of Music festival, which offers up and coming artists the opportunity to kickstart their careers by performing in venues throughout the Royal Town.

Mike Bushell, Sutton Coldfield Town Centre BID Manager, said: “We are delighted to reveal the winners of this year’s Sutton Has Musical Talent competition. Both the competition itself and the Month of Music Festival provide talented local musicians with an incredible platform to launch their career, with previous winners going on to perform on the likes of Brum Radio and BBC WM.

“Once again, this year we received an overwhelming number of entries, all of which were to an incredibly high standard. We’d like to thank all of the up and coming artists who applied to perform at this year, and a huge congratulations to both of our winners,” he added.