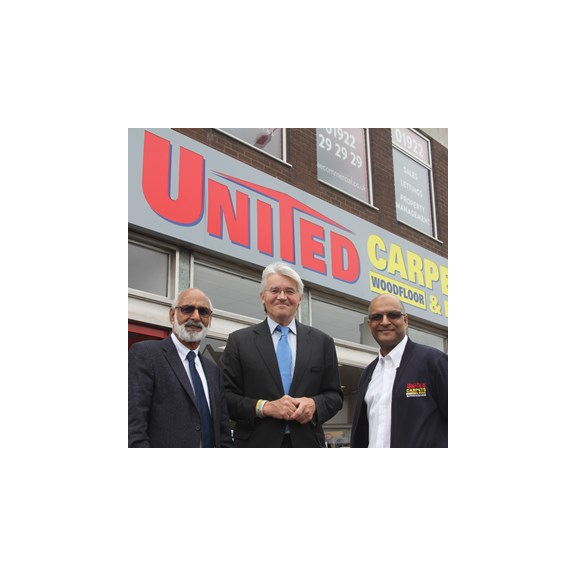 Mr Mitchell cut the ribbon to officially launch the new United Carpets outlet, which has rejuvenated the former HSBC bank building in the heart of Mere Green to create a bright and welcoming showroom.

Mr Mitchell said: “I was delighted to open United Carpets in Mere Green, which has not only brought another thriving business into the area but has also helped bring a prominent site back into use.

“Not so long ago, Mere Green was facing significant challenges but now it is seeing real investment and attracting the kind of businesses you would expect to see in an affluent, vibrant area.

“United Carpets is exactly the kind of community-minded, friendly business that is turning Mere Green into a thriving shopping destination and marks another step in the resurgence of the area.”

Friends, family, colleagues and well-wishers joined local leaders at the opening of the store, which sells carpets and beds as well as laminate, wood and vinyl flooring.

United Carpets director Naeem Arif, who sits on the executive committee of Sutton Chamber of Commerce, said: “We were delighted to have Mr Mitchell launch the store – he has always been so supportive of the Chamber and businesses in the area, and I’m glad that he was able to come and support us today.

“This new Mere Green store has been three years in the making, and we are really excited to be up-and-running in Sutton Coldfield.

“The store actually opened its doors two weeks ago, and we have already taken more than 50 orders which is a fantastic response. We have had great feedback from local people and our fellow business owners too.”

Naeem, a former Bishop Vesey’s student who lives in Wylde Green, said the company had invested significantly to transform the old building, including removing the heavy vault door.

“Lots of people have come in and said that they are glad the old bank is being used again, and that such a prominent site isn’t empty anymore,” he said, “They’re also surprised by the transformation inside and the freshness of the showroom.

“For me, retail is a team event. It’s about all the businesses in the area working together to make Mere Green a destination where people come for specific reasons and then support the surrounding shops too.

“While people may come to us to buy carpet, they can then pop into one of the other businesses to buy a coffee, to shop around and see what’s on offer from our fellow business owners.

“So hopefully, as a team, Mere Green will continue to flourish with United Carpets adding to that.”

Pictured: Andrew Mitchell MP with Aziz Arif and Naeem Arif outside the new store, which has brought the former HSBC Bank building in Mere Green back to life

Sutton Food Fest comes to The Townhouse
Sign up for offers
Sign up for what's on guide
Popular Categories
By clicking 'ACCEPT', you agree to the storing of cookies on your device to enhance site navigation, analyse site usage, and assist in our marketing efforts.
For more information on how we use cookies, please see our Cookie Policy.