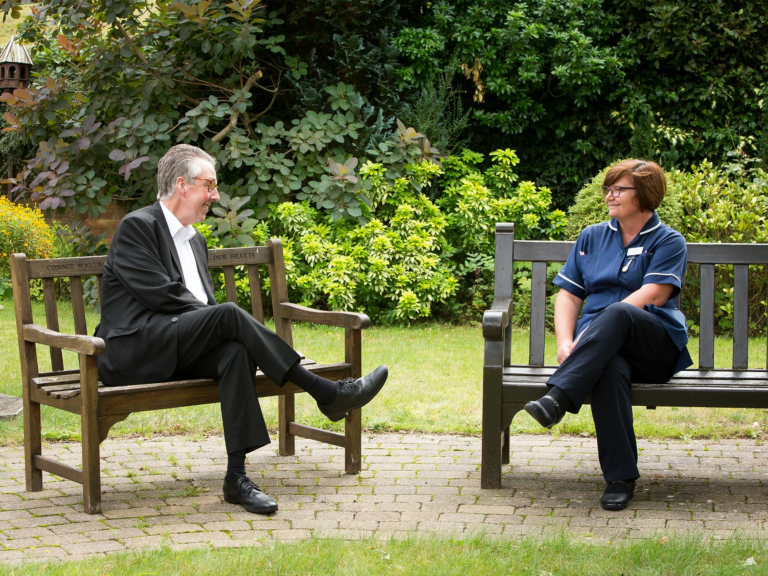 A Staffordshire priest is making a heartfelt appeal for people to support St Giles Hospice after they took such good care of his wife when she died just days into England’s first national Coronavirus pandemic lockdown.

Adam Watkinson had to say his final farewells to his wife Sue and go into self-isolation because of COVID-19, but added that even though he could not be with her, the knowledge that she was so well cared for and did not die in fear was the greatest gift the hospice could give him at such a difficult time.

His appeal comes as St Giles renews its call for people to support Katie’s Appeal, the charity’s response to COVID-19, at a time when it has been forced to close its shops again and cancel fundraising events, leaving the hospice more reliant than ever on donations from the community.

Sue was receiving palliative care as an inpatient at St Giles in Whittington when she called Adam on the morning of Wednesday, 25th March and told him she was struggling to breathe. Adam rushed to her bedside, fearing that she was taking her last breaths, but the nurses helped to reassure Sue and they were able to calm her down.

However, later that morning St Giles Clinical Director, Katie Burbridge, had to tell Adam the devastating news that they suspected she had COVID-19 and that they were waiting for the test results.

Adam said: “At that time - in the height of lockdown - and because I too had possibly been exposed to Coronavirus, I had no choice but to self-isolate for seven days on Government guidance.

“I sat next to Sue, holding her hand. She was wearing a watch that I had bought her just weeks before and I watched the minutes on it ticking down to 12, knowing from that moment on I’d probably never see her again.

“It was such an emotional moment for everyone, but Katie was so helpful and thoughtful. She knelt down next to Sue, held her hand and told her that she would keep her safe. It was a beautiful moment at such a terrible time. Katie’s reassurance was so important to us both.”

Sue, who worked as Matron-in-College at Eton School, was first diagnosed with cervical cancer in 2018.

During term time she and Adam, who is an Anglican Priest in the Lichfield Diocese and Chaplain at Charterhouse School, lived apart, but during holidays the couple shared a home in Alrewas with Sue’s son Sam.

They moved to their new home in July 2019, but only months later Sue fell ill on New Year’s Eve and a scan revealed that her cancer had returned and spread. She began chemotherapy but developed sepsis and was told that the treatment would have to end and that she would receive palliative care.

Sue was admitted to St Giles on Friday 20th March in the hope that her condition could be stabilised enough for her to return home, and Adam spent as much time with her as he could.

Adam added: “Right from day one she was totally reassured that St Giles was the best place for her to be. The nurses started caring for her straight away - no detail was left unchecked and they looked after her so well.

“The food was lovely and Sue was able to enjoy it – it was wonderful to see her regain her appetite and enjoy eating again. Sue loved birds and her room looked out onto the trees. We were allowed to put bird feeders up so she could watch them, which was such a joy.”

But two days later Adam was told that family visits were being limited to one a day due to the national rise in COVID-19 cases, and further safety measures were then introduced in accordance with Government guidelines.

“The staff were all so wonderful and we looked upon them as family,” he added. “They started to wear protective clothing – but despite that, we could still see their eyes and could see the love and compassion that was there.

“One of the people who cared for Sue was asthmatic and although she could have been vulnerable to COVID-19 herself I watched as she helped my wife. I preach about love and self-sacrifice but at St Giles I was watching it in action every day.

“They showed such professionalism, with humanity and gentleness. When the nation clapped for the NHS and health staff each week I could put real faces to them.”

Adam feels so grateful for the love and care that his wife received and the support that he and Sam have been offered since Sue died that he is sharing his story to support Katie’s Appeal - the fundraising campaign launched in Spring 2020, which has become vitally important again during the latest lockdown.

Adam has told his story in a moving video which accompanies the appeal, named after Katie Burbridge, the hospice’s Clinical Director who pledged to look after Sue during her final days when Adam was unable to visit.

“We are so indebted to Adam for his kind support and honoured that we were able to offer Sue and Adam comfort at such a heart-breaking time.

“With ongoing CVID-19 restrictions this continues to be an extremely worrying time for everyone, especially our patients and their families who are living with a terminal illness.

“As a hospice we are experiencing a big increase in demand for our care services.

"We are continuing to care for our community’s most vulnerable people which is easing the burden on the NHS and our dedicated care teams are still working 24/7 in our hospices and out in our community.

“We are concerned about the impact the Coronavirus outbreak continues to have on the hospice’s future.

"The fact is that we need to raise £850,000 every single month just to keep our services going. That’s why our message to the community is that we need your help today to ensure that we’re here for you tomorrow."

Reliving his final moments with Sue, Adam is asking people to help in any way they can. “It’s so important that other families continue to get the care, love and reassurance that Sue and I received,” he said.

“I was devastated when we had to part, but Sue told me not to get too upset and that it would just be like when we went to work at our separate schools. It was a relief to see that she had such acceptance and it helped so much that Katie had promised Sue would be safe.

"Sue’s end – when it came – was quite beautiful. She passed away on the morning of Sunday, 29th March, after a night of restful sleep. She could see the birds through the window and one of the nurses who was caring for Sue, noticed a change in her breathing and was holding her hand as she slipped away,” he added.

“The care and support we received as the end approached and the continuing support we have had from St Giles since Sue passed away is very special. They have kept in touch and they genuinely do feel like family to us.

“When we first arrived at St Giles a nurse said that the hospice was about life, not death, and we got a real sense of that. It’s not a place to be feared. There’s a vibrancy, there’s a care and there’s a joy.”

Anyone who would like to make a regular monthly donation or one-off donation to support the work of St Giles to give the hospice a little more certainty in these uncertain times can visit www.stgileshospice.com/katiesappeal