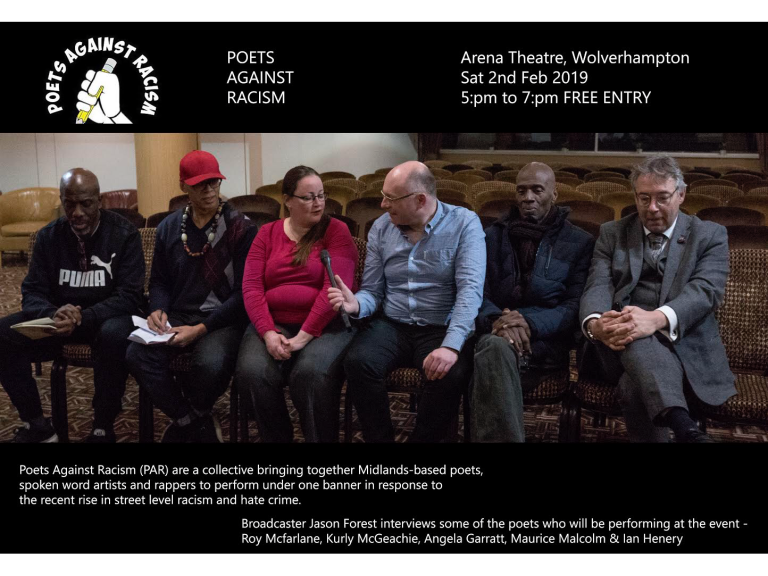 Poets Against Racism performed at the Wolverhampton Literature Festival on Saturday 2nd February in the Arena Theatre.  The Theatre was packed to capacity to hear the very best of the West Midlands` poets unite for a common cause.

The event was free.  "The important thing is to bring people together" said Manjit Sahota, who founded Poets Against Racism in London 3 years ago.  "The pounds and the pence do not matter.  We want to form a common platform for people of all ages and explore a common path ahead for the common good of everyone in society.  The background, religion or social class of a person doesn`t matter.  We all bleed the same colour".

Poets Against Racism are a collective bringing together Midlands` based poets, spoken word artists and rappers to perform under one banner in response to the recent rise in street-level racism and hate crime.  At the Wolverhampton Literature Festival members of the public were invited to explore the role poetry as a performance art can play in challenging racism and spreading positive words from diverse communities in the Midlands.

The event opened with a short discussion open to  the floor with former Birmingham Poet Laureates Roy McFarlane and Dreadlock Alien followed by live poetry performances by Poets Against Racism founder Manjit Sahota and local poetry guests including the Wednesbury Poet Laureate.

Amongst these, Ian Henery previewed his work for China West Midlands 2020 based on the sacrifices and experience of Chinese people in the UK.  The trilogy of theatre is entitled Home starting with the Chinese Labour Corps in the First World War, then the 1950s and the third story set in contemporary Britain.  The trilogy explores ideas of family, sacrifices, place and time from Chinese and British perspectives in the socio-economic context of 3 significant periods in recent history.