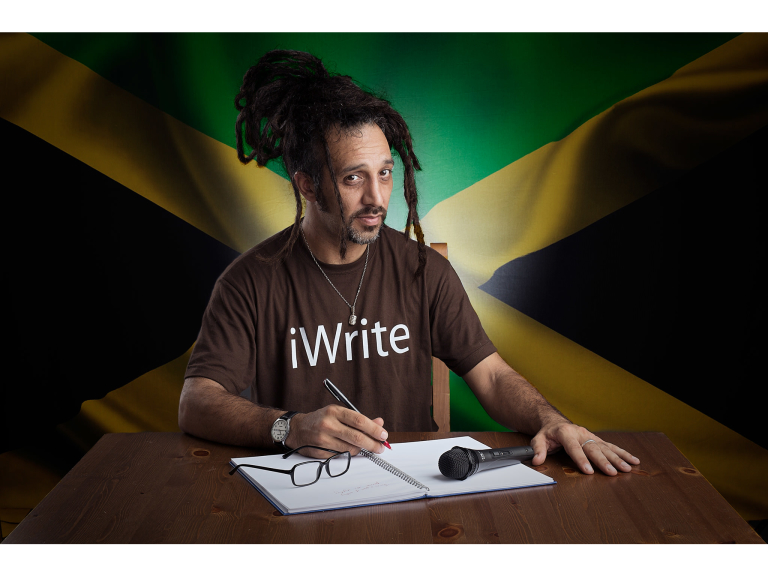 A  dreadlocked poet of Anglo-Indian and Caribbean origin is on a mission to  bring poetry to life.  Richard Grant, alias Dreadlock Alien, aims to reach a million young people in the next 10 years with the values of respect, tolerance, rule of law and democracy.  It is the  biggest literacy and social values project he has ever done in his poetry career.

Richard, who became  the 10th Poet Laureate of Birmingham and  performed at the recent Wolverhampton Literature Festival with Poets Against Racism in the Arena Theatre, works in schools such as Arthur Terry in Sutton Coldfield.  "I am on a mission to bring poetry to a new and younger audience", he said "by using the genres of slam, hip hop and performance".  Richard uses beat boxing and rhyming games to bring poetry to life.  His love of language is infectious and inspiring .  The audience in the Arena Theatre in Wolverhampton loved watching him work.

In addition to being a slam and performance poet he is also a host of BBC Radio 4`s Slam Poetry, Co-Director of Colour Free Vision Theatre, a founding member of the New October Poets and curator of the Art 4 Social Change collection of ethnic art.  A review of his incredible CV reveals that Richard, a shy and humble man unlike his alter-ego Mr Alien, is Co-Director of the UK Schools` Poetry Slam Championships which is an ongoing search for the very best of a new generation of poets from word of mouth submissions from over 35 top poets working in schools throughout the year.

"Most pupils find that literacy in general is dull", said Richard, "let alone the module of poetry.  It is great fertile ground for us to sow the seeds of learning with fun".  Richard did  not receive a salary as Birmingham Poet Laureate but he is a Arts Council supported writer in schools, libraries and community venues.  "My work challenges concepts of a colour-divided society" he said " that reflects my own Anglo-Indian-Caribbean heritage".

When the Dreadlock Alien goes into schools to deliver his poetry workshops children see poetry differently: they treat the creation of poetry as a fun challenge.  Pupils are encouraged to try and play with rhymes and extend their writing on unusual topics before performing their own poems to a panel of judges.  The Alien`s lesson plans also include a number of mini performances of his own imitable poetry and plenty of word challenges.  A poetry day in a school with Mr Alien also includes, as a finale, a mini rap battle between staff and pupils by being put on the spot to test their word power and rhyming skills.

Richard Grant aka Dreadlock Alien believes that slam contests are important to the poetry scene.  "The way people digest poetry is changing", he said.  "Book sales are falling but there are a lot of new mediums such as YouTube and DVDs.  Performance poetry is growing and is no longer a sterile recital of words from a page.  Acting skills are important".

According to Richard, the subjective nature of what makes a good poem is now interpreted by more than just academics.  "A lot of the best written poets are the worst to see live", he said.  "I pride myself on not being published and having my work in my head".  He believes that poetry is a tool for social change that can educate and entertain whilst addressing socio-economic issues.  Richard firmly believes that poetry is a vehicle for getting messages across to an audience and to stimulate discussion.  He aims to challenge people`s perceptions of poetry.

"Poetry is usually consumed at literature festivals", he said "but we also do pubs and comedy venues where you get people who would never normally pay to hear Carol Ann Duffy.  There is a lot of poetry that is about self-gratification with words but I think it should be a universal thing".

His greatest poetry success to date is to get the marginalised  pupils he works with each day to attend class, pick up a pen and fill a whole page with composition.  "That is a success for me", he said.  "The accolades and certificates along the way merely decorate the journey".  He owns a tour van which also acts as a special place for his writing.  "I own a tour van which I can park anywhere", Richard explained, "plug in the laptop and write away.  It`s ideal for me and the travelling lifestyle I lead.  Inspiration comes from experience, from the everyday, the path you have trodden and the one you wish to run down".

What of the future from this hardworking poet?  "Colour Free Vision Theatre is an evolution of the New October Poets", he said "that focuses on the education and corporate sectors.  A collective of professional poets, literary consultants and theatre directors, we network opportunities whilst developing and retailing products for schools".