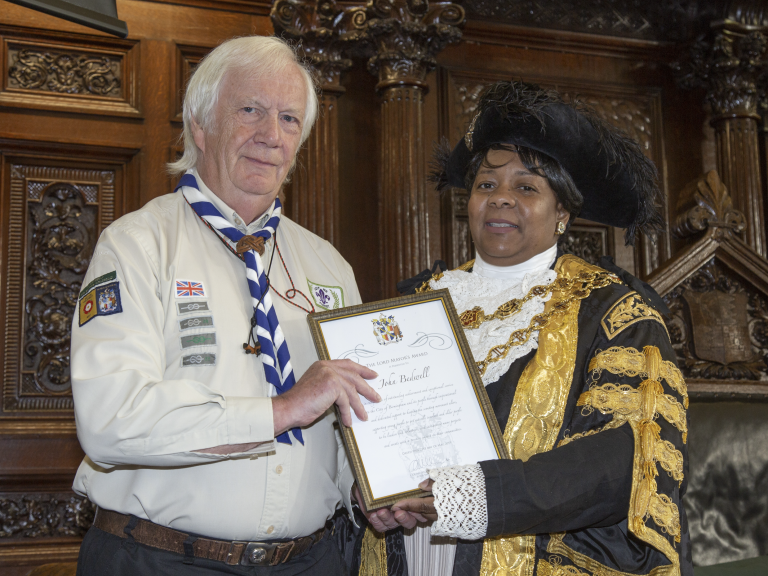 John Bedwell, a Scout Leader with Sutton Coldfield West District has been awarded a Lord Mayor’s Award for his work within Scouting, one of three awards presented this year.

Presented by Lord Mayor, Councillor Yvonne Mosquito at the recent Annual General Meeting, the award is a huge achievement for John celebrating his years of dedicated service to Scouting in Birmingham.

John has been involved in Scouting for over 29 years at 1st Streetly Scout Group,  as Scout Leader and Group Scout Leader whilst also holding various roles supporting Sutton Coldfield West District The award is presented annually to individuals for outstanding achievement or exceptional service to the City and the people of Birmingham.

The citation on his certificate summed up the reason that John was chosen for the award:
“ … through inspirational and dedicated support to keeping the Scouting movement alive, supporting young people to get involved and older people to become leaders and volunteers, and instigating many projects and events with a positive impact on their communities”.

On being presented with his award John commented: “ I don’t volunteer to receive awards it is something I do to on a weekly basis to get involved with developing skills within our local youngsters, but it is fantastic to have been selected for such an award. To anybody who has any spare time then volunteering at your local Scout Group is a brilliant way to see youngsters develop and give something back to your local community”.

Birmingham Scouts is working with over 7,600 young people throughout the city and Sutton Coldfield from many faiths and backgrounds, supported by over 2,200 volunteers such as John, helping 6-25 year olds grow in confidence, achieve their full potential and become active citizens for the future…. In fact working towards #SkillsForLife