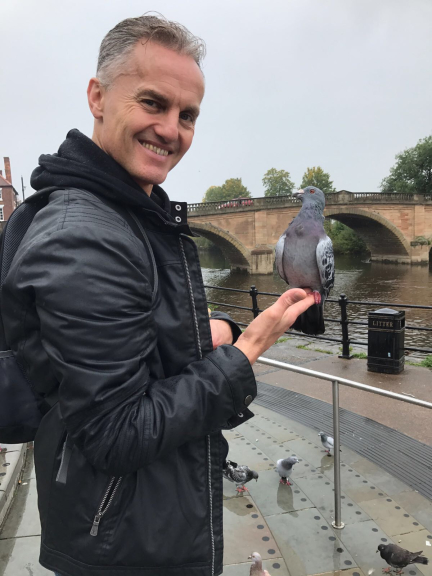 I became Vegan at 17 years of age so I have been vegan for 35 years now, and without doubt will remain vegan for the rest of my life. One day my mother told me to pay the milk man at the door ironically when I was 17. Returning I found a leaflet about vivisection in her purse. I read it. I had never even heard the word before. Most people had not heard of it back then.

I have always lived in the West Midlands. My back garden gate went into a woodland in the house I grew up in as a child. I often witnessed people shooting animals for fun. I could not understand why they wanted to murder animals and I spent the last moments of life with a few unfortunate victims of this madness, until their eyes slowly closed for the last time. Its strange how some people have empathy yet others a total coldness to all others they wish to simply use, abuse and destroy.  I realised that for some reason I was put here as a force for good rather than a force for evil.

I joined an antivivisection group and began reading books about vivisection and then became aware of factory farming, hunting, bull fighting and all other manner of other practices in which humans see it as acceptable to use and abuse non human animals as mere commodities for money making, pleasure or as food stuffs we do not even need.

I realised I did not wish to follow the status quo and I wanted to break out of the social conditioning and lead a far more rational and compassionate way of life. Veganism is not a diet. It is a way of living. A far more rational way of living that considers how we impact upon animals, the environment and each other also with almost a billion people going hungry and starving today whilst grain crops are diverted to farmed animals that give only a fraction back in protein compared to the plant proteins they need to consume to create it.

I consider myself an ‘ethical vegan’ not a dietary vegan as veganism is not simply about what I feel is unacceptable for myself to consume or use, but about social justice for all non human animals who clearly have a right to experience life and what it means to live just as we consider it our own natural right from birth to be able to experience life.      I believe we should view non humans not as ‘what’ they are but for ‘who’ they are. Because they are not like us does not mean they have lesser worth. They should be treated as individuals and given respect. Treating non human animals as lesser to humans simply because they are not human and so have no rights is speciesism. I consider myself an anti speciesist.

Being Vegan is the best thing I have ever done in my life. Things have certainly come a long way since veganism started in 1944. It takes time for attitudes and the human mindset to change. It will take a lot of effort from todays vegans to educate the masses, but it can be done. Indeed it has to be done as animal agriculture is simply not a viable way to feed the ever growing human population as the UN states itself, advising an urgent shift to plant based diet.

After many years of not telling people that being vegan is easy, I now advise them that in fact it easy, because it really is. The only hard bit is breaking out of the socially conditioning mind set that tries to block us against any change in lifestyle. We have a few slight doubts and apprehension perhaps, so we decide never to change. Humans are herd animals too you see. We follow all around us in so many ways. This makes us feel invisible to others. Nobody will ask us to ever justify ourselves and so forth.     The problem is we never discover who we really are, the far better force for good we can be.

It is quite obvious now to any intelligent and rational thinking person that humans need to do things in a better way, a more compassionate and less destructive way. This means a far healthier society for humans both physically, mentally and a far more peaceful less violent society also, and of coarse less suffering for non humans too.

Its time for everyone to be vegan and I would urge anyone wanting to, to contact Animal Aid, Viva or The Vegan Society for information and advice.