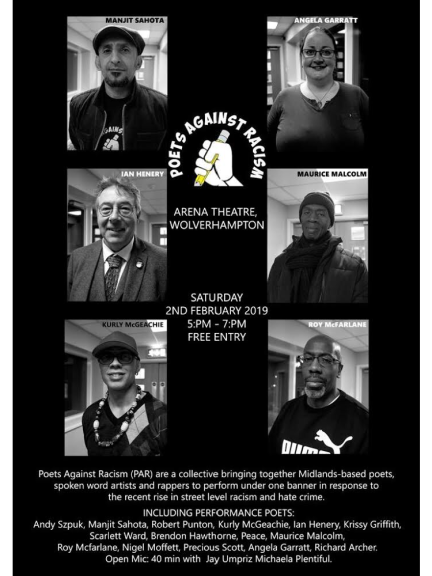 The aims of China West Midlands 2020 is to strengthen connections in business, education, culture, arts and sports for deeper understanding, greater collaboration and mutual prosperity between the West Midlands and China.

Ian Henery, poet, solicitor and playwright, was invited by Wolverhampton Literature Festival to preview some of the work has been commissioned to write for the project during the Opening Ceremony at the Arena Theatre on Friday 1st February

And with Poets Against Racism on Saturday 2nd February once again in the Arena Theatre.  Between 1917 - 1920 it is estimated that 140,000 young men volunteered to serve Great Britain and it`s allies in the Great War.  Historians claim that 20,000 of these civilian volunteers died - some after the Great War had ended - of disease, starvation and unexploded shells as they removed dead bodies, spent ammunition and unexploded bombs.

"They travelled half way around the world", said Ian, "in cattle trucks and rammed into the holds of ships as they sailed across the Pacific and Atlantic Oceans.  Some died on their way to France, simply thrown over the side of the ship to rest in unmarked graves, their families never knowing where their mortal remains were laid.  The civilian volunteers had their distinctive pigtails, a mark of their culture, cut off, by non-Chinese soldiers and they were then given an identity number.  These civilians were put under non-Chinese British military control and their officers spoke no Chinese or understood Chinese culture."

Ian points out that there are 60,000 war memorials to the First World War - including memorials to animals and Germans - but none to the Chinese Labour Corps.  They have been whitewashed from history books.

"Their contribution is forgotten", said Ian, "they are the forgotten of the forgotten".  All that is now changing with an exhibition about the Chinese Labour Corps in Birmingham Library and the Chinese Community Centre in Birmingham.  The Chinese Labour Corps have been the feature of BBC documentaries and books.  China West Midlands 2020 commissioned Ian to write a play about this period in history and Ian read the poem below at the Wolverhampton Literature Festival in their honour.

"I am delighted to be able to say that the play will be performed by Searchlight Theatre and the students of Stagecoach Performing Arts in Sutton Coldfield", said Ian "and I cannot wait to see what they do with the script.  It is the first play in the trilogy entitled Home and to be involved in a project like this is both humbling and an honour".

Picking Up the Pieces to Make Peace (The Chinese Labour Corps)

I am far from China, I am afraid;

All of my dreams have been battered  and torn.

Done my duty and the game I have played:

Given a number and my pigtail shorn.

We now fly to France like a flock of geese

And serve - picking up the pieces to make peace.

Men in uniform, their fate sealed,

Poppies, for them, on battlefields.

And raining on trenches, pouring with blood.

We are here to rebuild, hatred must cease:

Let`s now pick up the pieces to make peace.

Across parapets to their doom;

Trudging through mud, a man-made Hell,

A senseless war in the trenches.

Carnage among the Great British Empire

And mowed down by the machine gun rattle.

Jaws of Death - we civilians have come -

And marching to the beat of our own drum.

Men in uniform, their fate sealed,

Poppies, for them, on battlefields.

Pick up the pieces and let us make peace:

When will we become humans of the world?

In God`s name, war and suffering must cease

And love - at the politicians - be hurled.

Why is there hatred across the earth?

Why do we torture, maim and kill - in mirth?

We will not be consigned to dust:

We are warriors, glorious!

Jaws of Death, the Chinese have come,

Marching to the beat of our drum.

War and suffering must cease -

Pick up the pieces and make peace.

7th January 2019 (The line "We`ve got soul but we`re not soldiers" is dedicated to the students of Stagecoach Performing Arts, Sutton Coldfield and is based on a lyric by The Killers called "All These Things That I`ve Done")

New campaign to tackle loneliness secures Government funding
Sign up for offers
Sign up for what's on guide
Popular Categories
By clicking 'ACCEPT', you agree to the storing of cookies on your device to enhance site navigation, analyse site usage, and assist in our marketing efforts.
For more information on how we use cookies, please see our Cookie Policy.