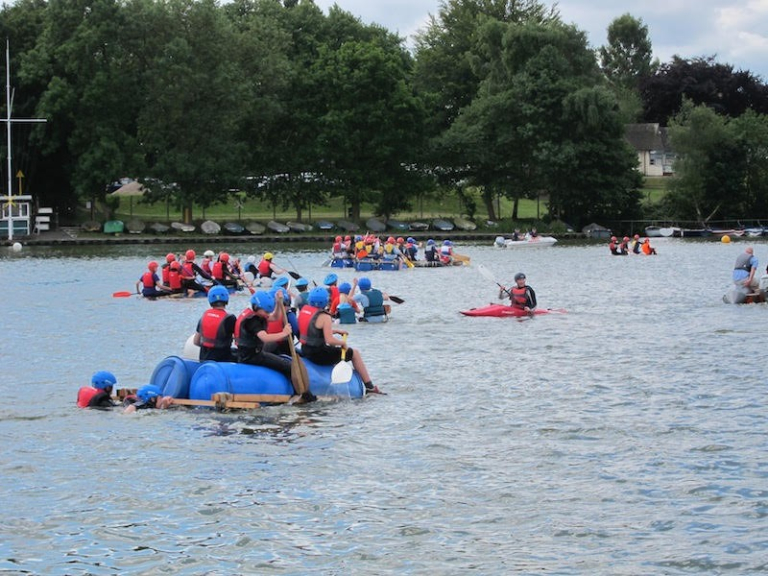 "Scouts love getting wet", said Adam Hodson, Assistant District Commissioner for Scouts in Sutton Coldfield East "and this is a great team-building activity.  They will have an amazing morning with friends on the water".

The annual event is held jointly with Scouts from Sutton Coldfield East and West Districts.  The Scouts will build their own raft and then battle it out on the water to see who will be the fastest, tackling different challenges during the morning.  The annual Scout Raft Race is popular as it brings together Scouters and the community with spectators watching as the morning unfolds.

"Raft building can be done on many levels", explained Adam "which  includes a raft to carry a teddy bear across a paddling pool to a raft to carry a patrol across a lake.  It traditionally involves building a raft from pioneering poles, rope and barrels.  These are traditional Scouting  skills which Sutton Coldfield`s young people learn to good effect".

The Raft Race will take place between 10 - 12 noon on Saturday 30th June at Powells Pool in Sutton Park.  Each team consists of 4 - 6 Scouts who must build a raft and race it across the water.  The event will be supervised by a safety team using powered rescue boats and kayaks.

"Any Scout will be removed from the water if showing signs of fatigue, cold or if the safety team deems that their craft is no longer viable", said Adam Hodson.

Prior to the Raft Race itself there is a timed construction stage for each team, who must demonstrate making the rafts out of barrels, poles and rope using traditional Scouting skills.

"There can be no pre-construction allowed", explained Adam "including no pre-drilled  carpentry joints.  No rubber bands, screws or nails will be accepted as part of the construction.  The true spirit of the competition is teamwork and survival skills in the style of our Chief Scout, TV adventurer and survivalist Bear Grylls".

The event gives Scouts the opportunity to work together as a team.  They must build the raft together and then race it against other Scout groups from Sutton Coldfield.  All competitors must wear life jackets and buoyancy aids along with helmets for the race.  "We advise kayak helmets", said Adam "but not climbing helmets.  It is advised that a wet suit is worn but old track suit bottoms and a T shirt will do with either wet shoes or old trainers.  No bare feet will be allowed.  A dry set of clothing and a towel should be brought along".

Adam Hodson promises that the annual Raft Race will be an unforgettable experience for the young people of Sutton Coldfield.  "We deliver fun, challenge and adventure to young people", he said "from kayaking, air rifle shooting to Chinese calligraphy.  There is something for everyone.  Scouting gives young people experiences they`ll never forget and experiences that challenge them and help them fulfil their potential.  Scouting changes lives through fun and challenging activities, unique experiences, everyday adventure and the chance to help others".

Adam Hodson points out the example of British astronaut Major Tim Peake, European Space Agency astronaut and International Space Station crew member and who was, himself, a Scout.  "it was particularly inspiring", said Adam, "for Major Tim to be quoted as saying that Scouting was the first step of his life-long journey to the International Space Station.  I often say to adult volunteers in Scouting never to underestimate the influence they can have on a young person`s life".

Adam Hodson believes that small acts can transform the world and he - like all of Sutton Coldfield`s Scout leaders - believe that they are privileged to have the opportunity to inspire, teach and influence in a positive way.

And on Saturday 30th June the aquatic action begins on Powells pool for the 2018 annual Sutton Coldfield Scout Raft Race.

If you would like to volunteer as an adult, please call Assistant District Commissioner for Development, Sutton Coldfield East, Ian Henery on 074 786 70503.

Andrew Mitchell MP attends Royal Town fair
Sign up for offers
Sign up for what's on guide
Become an author
Popular Categories
By clicking 'ACCEPT', you agree to the storing of cookies on your device to enhance site navigation, analyse site usage, and assist in our marketing efforts.
For more information on how we use cookies, please see our Cookie Policy.