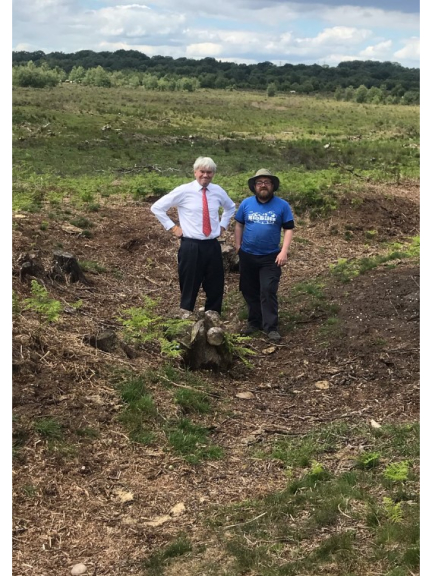 In a break from the recent dreary weather Andrew Mitchell MP embarked on a sunny Friday tour of Royal Sutton Park with Daniel Squire, the Senior Ranger of Sutton Park and other parks in the area. Second only to Richmond Park, Sutton Park is the biggest municipal park in Europe and arguably the oldest.

On the day, the Park was holding its Annual BioBlitz and around 200 pupils from local primary schools were present to help as part of their transition day. The event, which is run over a 30-hour period, is designed to record as many different species in the Park as possible.

During the tour Andrew Mitchell saw the extent of the heathland restoration work taking place to try to retain the rare and threatened habitat of lowland heathland. This conservation work also uncovered a First World War training trench that has now been included in the extensive heritage trail. The heritage trail also includes miles of mediaeval ditch and bank, Bronze Age sweat-chambers, Roman remains, and The Druids Well.

Our MP explored other parts of the park and saw the disrupted land that has been caused by the badger population. Andrew Mitchell, who is a supporter of badgers, heard that the population is healthy, and their sets are dotted around the Park. The 2,400-acre National Nature Reserve is home to a diverse population of wildlife and plants that match the variation in landscape of open heathland, woodlands, lakes, wetlands, and marshes.

After the tour Andrew Mitchell said:

“I would like to thank the rangers and Park staff for all the hard work that goes in to maintaining the Park so that we can all continue to enjoy it.

“Although I often visit the Park – usually with Scarlet my much-loved Welsh Springer Spaniel – seeing once again the scale and beauty of our Park has made me more determined than ever that responsibility for running the jewel in our Royal Town’s crown should be undertaken by our Royal Sutton Coldfield Town Council for the benefit of all in Sutton Coldfield.”

If you would like more information about this topic, please contact Rt Hon Andrew Mitchell MP at 020 7219 1799 or email at andrew.mitchell.mp@parliament.uk.