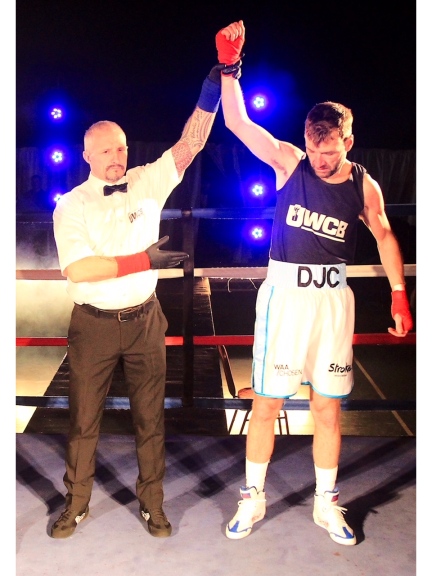 Dan Clifford, the chief commercial officer of Wrens Court based marketing agency WAA Chosen, took to the boxing ring for an amateur bout just 18 months after suffering a near fatal stroke that led doctors to believe that he may not regain speech and movement.

However, his recovery was completed in spectacular style last weekend when he landed a third round stoppage of his opponent to win his Ultra White Collar Boxing clash in front of 1,000 spectators in his home town of Coventry.

Clifford, 42, who was sponsored by WAA Chosen and cheered on by colleagues including founder Andy Wilson, admitted the challenge had been daunting but also one of the best experiences of his life.

He said: “Having a stroke at such a young age was a real shock to the system and I have to admit that I was very ignorant about the subject and just assumed it was something that happened to old people.

“I hated being described as a ‘stroke survivor’ and also a lot of the negative talk about the amount of people that never fully recover and what it means to your life when its happened to you.

“I wanted to do something that really drove home the chances of a full recovery, and also encouraged people to find the motivation and desire to help themselves and do all the health and well-being things that would give them the greatest chance.

“I was friends with the owner of Ultra White Collar Boxing and knew all about the organisation and the phenomenal amount of money that they raise for Cancer Research – my father died of cancer so it felt like the perfect combination of challenge and cause.

“I think my friends and family were worried at first, but that subsided when they saw the transformation that took place within me – I lost over three stone in weight, was running over 50 miles a week, gave up alcohol completely and was doing weight training every day. I have never been fitter.”

And Clifford believes that if other people are inspired to take up the challenge they should ensure that they sign up with a reputable organisation that concentrates of the well-being of competitors.

He said: “I was very impressed with the professionalism of the whole experience. You are weighed when you train and you are matched with someone of comparable experience and skill. There is a pre and post fight medical, insurance for all fighters and a corner team looking after you – you feel like a top fighter!”