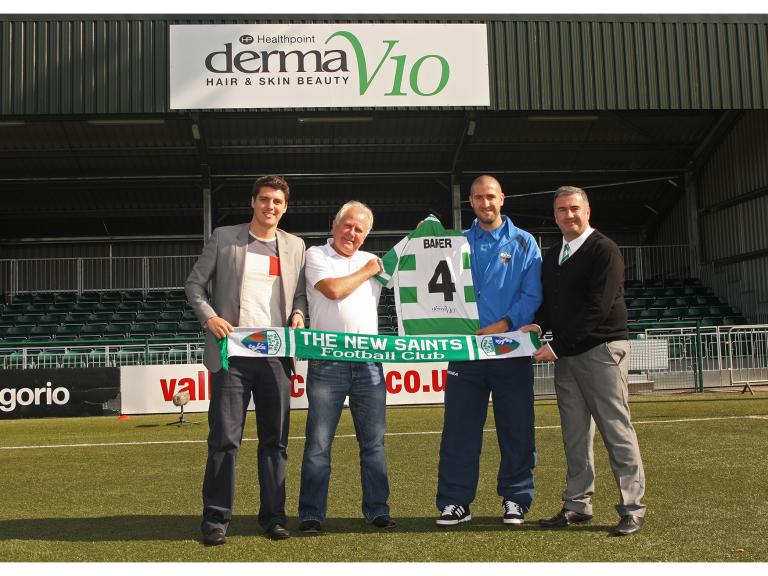 The investment will help to financially secure the Welsh Premier League side and comes at a time when the Saints are looking to cement their reputation as a ‘family friendly’ club.

This is the first sponsorship to be entered into by Healthpoint – a company based in Blackpool that sells over 20 million cosmetic products across the UK each year, sold in stores including Wilkinson’s, Savers, Home Bargains and Tesco, among others.

Announcing the agreement, which has been signed for an undisclosed amount, Saints chairman, Mike Harris, said: “This is a fantastic long-term deal for the club. We have only been partners with Healthpoint for six weeks, but already they have produced some fantastic ideas that will benefit both the partnership and our fans.”

“They are a key partner for us and we will be drawing on each other’s business expertise to expand the club.”

Harris, a self-made businessman and entrepreneur began his involvement with The New Saints in 1997 when the telecoms company he founded, named Total Network Solutions, became shirt sponsors of Llansantffraid FC, this was followed by a name change of the club to Total Network Solutions and a merger with Oswestry Town. After the sale of the company in 2005 to British Telecom, Harris re-named the club The New Saints of Oswestry Town and Llansantffraid.

Harris comments: ”We devoted much of our marketing budget for nearly 10 years into football, it created a high brand profile for us and I’m sure it can do the same for Derma V10.”

Bob said: ”We are extremely proud to connect our brand, Derma V10, with The New Saints and its supporters. We hope to increase awareness of our brand in Wales and beyond and being associated with the most successful football club in the League of Wales is a great way for us to do this.”

The deal will also benefit supporters to The New Saints home ground – The Venue at Park Hall, as Bob continues: “We want to increase recognition of our products, so we’ll be giving away Derma V10 cosmetics to supporters at home games through promotions.”