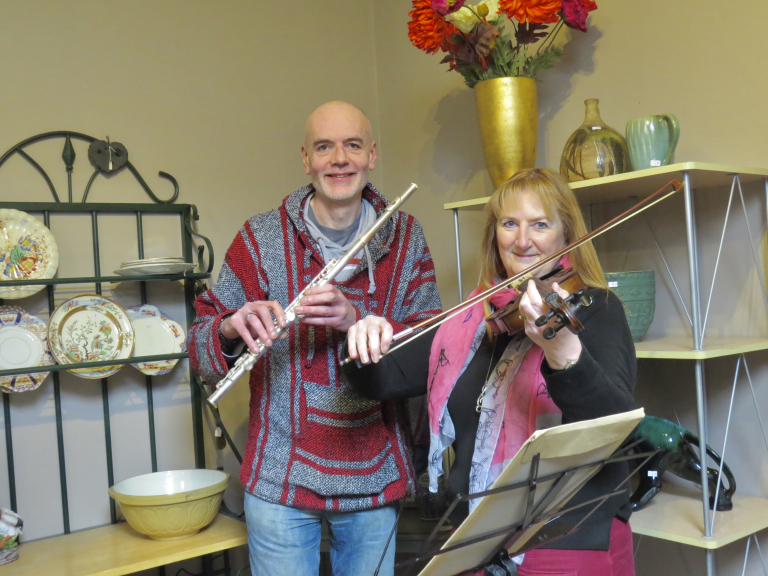 Music MOB (Music Matters in Oswestry and the Borderland) is the brainchild of town councillor and business owner, Mike Coppock, who is on the Committee for the Oswestry Youth Music Festival.  He could not help noticing that the proportion of entries in the festival from children in local State Schools was diminishing year on year.  It is widely accepted that art and music departments are much more likely than sports departments to have their importance questioned, and their budgets limited but there is much research which points to the fact that whilst sport and music share many benefits, studies suggest that if stronger educational outcomes are your goal, music is the better choice.  It should, at the very least, be on an equal footing with sport.

In years gone by, visiting musicians (peripatetic teachers) were a common sight in schools, offering lessons on a variety of instruments.  Many of us will have had a first experience of learning an instrument and then playing it alongside other people in a band or orchestra in the school environment.  Similarly with choirs in school, another disappearing opportunity.  These opportunities are no longer a common feature and Mike Coppock along with a small group of like-minded people have determined to provide the funds to make this possible once again in our local State Schools.

There are children in Oswestry who have benefited from instrumental or vocal lessons from families who have been able to fund their lessons in school and they have said,

“Music is very important in my life – it is relaxing, interesting and makes me feel as though I am really achieving something”

“If I am ever having a bad day, my music lessons put a smile on my face”

Music MOB would like to redress this balance and remove the potential financial barrier from a child’s choice to learn an instrument or have singing lessons,  The Constitutional aim of Music MOB is to support free instrumental and vocal lessons for children whose families may not have the means to provide them. Although the lessons would take place in school, there will be no cost to schools or families for either the teaching or the instruments.

Music MOB is a team of committed local music makers and its Board of Trustees includes Sue Turner, organiser of Oswestry Youth Music Festival and a respected peripatetic instrumental and vocal teacher.  The Charity plans that the scheme will begin in schools in September 2020 and after a recent approach to all local schools, is in conversation with two with a view to presenting this opportunity to their pupils.

Music MOB is not unique as there are charities with the same aims in other parts of the country, with growing numbers of children benefiting. The largest of these is in the South East and is supported by the Andrew Lloyd Webber Foundation.  Crucially, we know that OFSTED is now looking more widely for evidence of Arts provision in schools, so we hope that our initiative will be of interest to schools and parents in this area.

There will be a launch concert on 20th June, which will take place at 7:30pm at the Marches School and anyone interested in attending is cordially invited. The Concert will include music from youth choir, the Clef Hangers, rock band, Red Mist, The Orthopaedic Male Voice Choir, Porthywaen Silver Band and, hopefully, the winners from May’s Youth Music Festival.

The Charity would like to ask any individuals or groups who have either string or woodwind instruments no longer needed or wanted, to consider donating them to Music MOB as it builds its stock.  The charity has the capacity to service and/or mend instruments, so people should not worry about the current condition of the instrument.

There is of course plenty of academic and empirical evidence to show that children who learn an instrument or have vocal training benefit both academically and socially. Cognitive development is improved, and music making can also boost mental health, develop teamwork and improve listening skills and multi-tasking. Here are some examples of research which demonstrate the positive outcomes.

University of Montreal – musical training can change brain structure and function for the better. Long term memory is improved and children become more mentally alert. They also demonstrate better handling of multi-sensory information. Starting younger drastically improves all of this

University of Zurich – children become more self-disciplined, attentive, can plan more effectively, interpret the emotions of others and find it easier to pick up new languages

Issued for & on behalf of Music Matters in Oswestry and the Borderland.

Australian Exhibition ‘The Big House’ Comes to Oswestry This Summer.

Oswestry Charity Market a Great Success Despite Weather
Sign up for offers
Sign up for what's on guide
Popular Categories
By clicking 'ACCEPT', you agree to the storing of cookies on your device to enhance site navigation, analyse site usage, and assist in our marketing efforts.
For more information on how we use cookies, please see our Cookie Policy.