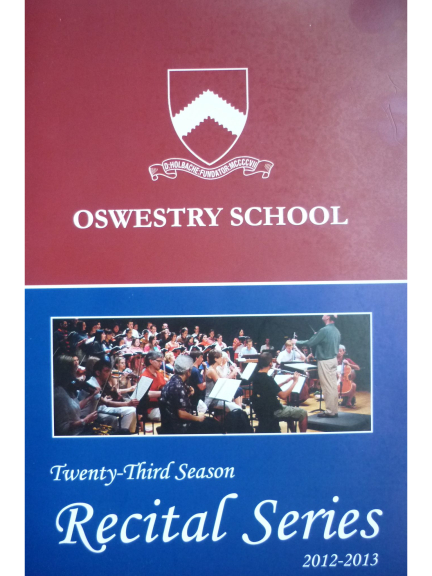 In October, the fabulous guitarists, the Katona Twins, with the City of London Sinfonia: then in January, a welcome return by the European Union Chamber Orchestra, whose programme will include a delightful Haydn piano concerto.

In February, a wonderful young Japanese duo: the violinist, Chieri Tomii, and pianist, Tadashi Imai. (They shared a concert with Guy Johnston and me in London, and they are just fantastic!)

In March 2013, an exciting combination of the Endellion String Quartet with the poet Sir Andrew Motion, performing Haydn’s Seven Last Words, with Sir Andrew reading his own specially written poems between the movements: a rare chance to hear this very great work by the ‘father of the string quartet’.

Then, in May, three players from the superb Leondari Ensemble with a fabulous Brahms evening – part of their International Brahms Festival. Finally, a very welcome return visit from the brilliant young pianist, Benjamin Grosvenor.

In collaboration with OL and the Shropshire Music Trust, we welcome one of the gems of English orchestras. CLS is the resident orchestra for Opera Holland Park, regularly plays in all the major London concert halls and tours widely on the international scene. Their innovative concert for us features the remarkable Katona Twins. They have performed in many of the greatest venues and their highly versatile approach has made them popular across the whole spectrum of music-lovers everywhere. Their fascinating and exciting programme features Mozart (Divertimento K136), Piazolla (Homage a Liege), Falla (El Amor Brujo Suite) and Tchaikovsky (Serenade for Strings, Op 48).

Since its formation in 1981, the orchestra has gained a world-wide reputation for its vivid performances in major concert halls and festivals in 73 countries: during 2011-12 they have played in France, Holland, Belgium, Turkey, Luxembourg, Germany and Italy, with stars like Nicola Benedetti and Alison Balsam.
Their programme for Oswestry is a real treat: Grieg’s ever-popular Holberg Suite, Haydn’s Piano Concerto in D, Tchaikovsky’s Elegy for Strings and finally one of Mozart’s greatest symphonies, No 40 in G minor. With so many EU countries represented amongst its players, the orchestra seems to have an added piquancy and élan, adding even greater zest to their playing. Something in Europe is working!
This should prove a very popular concert: early booking is advised.

Chieri was born in Japan, where she won the Student Music Competition of Japan when aged just 10. Currently studying with Professor Gyorgy Pauk at the Royal Academy of Music, she has won numerous awards and performed in numerous master-classes. Playing with rare assurance and musicality, she is quite special, with surely an exciting career ahead. Don’t miss her!
Tadashi was also born in Japan, and studied in Tokyo, Texas and the Royal Academy. He has won numerous prizes and awards in Japan and the US, including the Grand Prize at the Grand Prix International Chopin Competition. Appointed ARAM in 2008, he has been the official accompanist at many competitions and festivals, including the Menuhin International Violin Competition and Hungary’s Bartok Festival. Their programme will include the exciting 2nd Sonata by Bartok, as well as sonatas by Beethoven and Franck - his much-loved A major Sonata.

When I heard the renowned Endellion Quartet (together with Andrew Motion) perform, I promised to get them to Oswestry one day. The Endellion need little introduction, being renowned as one of the finest quartets in the world. They will play Haydn’s great work, the ‘Seven Last Words’ (from the Cross). Sir Andrew will read between the movements his specially written (and beautifully composed) passages. This is a rare opportunity to hear such a great work, newly interpreted, and will surely be the first time Oswestry will have welcomed a former Poet Laureate.

The marvellous cellist of this piano trio, James Barralet, has family connections within Whittington. Having heard James and his pianist Simon Callaghan play in Whittington last year, I know we shall be treated to a fine and varied recital. They will be joined by the American violinist Laura Lutzke (trained at New York’s Juilliard School and the Guildhall, London) in a programme to include the E minor Cello Sonata, the G major Violin Sonata and two piano trios.

A second visit from the stunning young Benjamin Grosvenor. Since his success in the BBC Young Musician Competition in 2004 (when just 11), several exciting developments have taken place: two BBC documentaries, the youngest ever British musician to sign with Decca Classics, and the soloist in the opening night of the 2011 BBC Proms. He really enjoyed his evening here in 2011, and is looking forward to playing for us once again. His programme is yet to be decided.

Tickets and further information from: