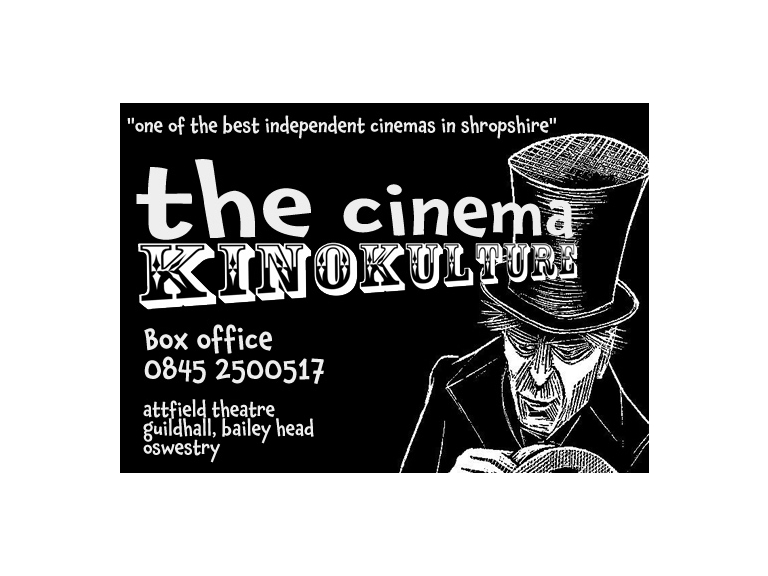 As night falls a choir will assemble on the Bailey Head to perform the Supermarket song cycle by Neil Phillips.

Above them, a series of films will be screened on the market hall, creating a unique and atmospheric experience.

Highlighting Oswestry's market heritage and rallying support for the town centre, this free event is being partnered

by an Apple Day running alongside the normal market which will celebrate local apple growing, food and drink.

Just as brothers Terry and Andy Macguire decide to rob a bank, workers on a Docklands building site uncover a
burial ground sealed up in 1666. However some of the corpses aren’t Brown Bread at all and before you know it
London’s East End is infested with hungryzombies.

Using archive footage, stills, animation and experimental video techniques, multimedia artist Ian Helliwell.
explores the world of Fred Judd, a pioneer of both amateur radio and early electronic music.
With Director's Q &A and music from the People's Vinyl Collective.

Snow White And the Huntsman (12A)

From the Producer of Alice in Wonderland comes 'Snow White and The Huntsman'   a new vision filled with intense battles and spectacular visual effects that turns the legendary Grimm's Fairy Tale into a dark and gritty action-adventure epic.

A man has confessed to murder and agreed to lead the police to the body.

The only problem is that he can no longer clearly remember where it was buried.

Joint winner of the Grand Prix at the 2011 Cannes Film Festival, Turkish director,

Nuri Bilge Ceylan's latest film, is a masterpiece of cinema.
A brooding thriller as challenging as Antonioni's Blow-Up.

Belgium-based trio Dominique Abel, Fiona Gordon and Bruno Romy follow their acclaimed Iceberg and Rumba with another Tati-inspired, candy-colored romp:  this time, a charmingly off-kilter adventure about a hotel clerk who falls in love with a wish-granting fairy.

For screenings at the Attfield Theatre, The Guildhall, Bailey Head the doorsopen 15 minutes before the screening time.

Kinokulture is a not for profit arts and educational workers cooperative trading under the name of Kinokriminalitat Ltd
registered in England and Wales. Company no. 7093610

kinokulture are members of Shropshire Screenbringing digital cinema to rural communities across the county, for more information on what's on please visit: www.shropshirescreen.co.uk/