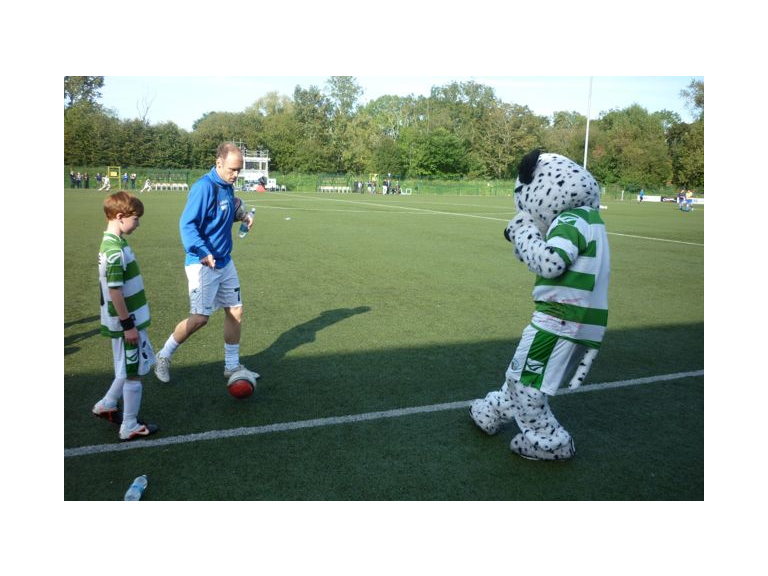 Today I went along to watch The New Saints play Bangor City FC - a Welsh Premier League game with two of the most competitive teams in the league.

There was good support from Bangor.  Standing next to them during the game, they really supported their team.

The game started apace, and TNS were quickly on the front foot, with attack after attack.  The first goal was a cracker by Alex Darlington, ghosting past the defender and slotting the ball home.

The first half was all TNS.

At half time, all the young academy players came on the pitch for team photos and a local primary school played a penalty challenge trying to score past TNS Spot, the club mascot. :)

The second half, Bangor came out well, but The New Saints scored again early on with Michael Wilde - a nicely worked goal.

Bangor worked hard to come back and had several chances to score, but TNS, as well as having a swift and skillful attack, also have a pretty solid defense.

The team are very well-organised and, for anyone who enjoys football, play a neat and tide passing game.

All in all, it was a great family atmosphere, all the kids enjoyed it, the players were happy to sign footballs before the game, S4C was there to broadcast the game - and with the 3-0 result to finish it off, it was great fun!

Thanks must go to the management and staff for putting on such a great day's football.  Thanks to Bangor City too - a team with a lot of heart and skill; today just wasn't their day, but it's a long season, and it wouldn't surprise me to see them competing for the mantle of champions at the end of the season.