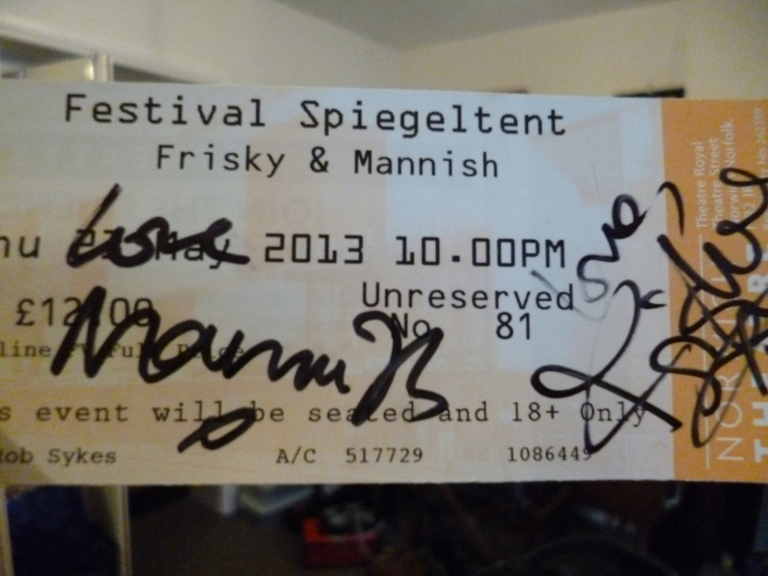 The 2013 Norfolk and Norwich Festival has drawn to a close.  Being a city centre resident I saw the 'Festival Gardens' in Chapelfield slowly being dismantled on my Sunday morning jog.

This year we managed to get to much more than previously.  I think being more organised helped.  I will admit, please don't tell, that we did produce a spreadsheet to allow us to fit in as much as possible around work and other commitments!

I have already written about the launch, Faust, Boneyard Tales, Fragile and the wonderful Spiegeltent, but what else entertained me over these two weeks.

The ‘Streetwalker Gallery’ by Ljud Group - this free open air gallery was so surprising.  I was dubious at first, but when I realised with amazement what they had created, I was so impressed.  This cleverly identifies unusual places, objects and views around the city centre and shines a new perspective on them.  This included anything from bins, mirrors, signs, cones....  A wonderful comic tour, showing parts of the city in a new light.

These Foolish Travels by Brian Griffiths saw tents and sheets adorned around Norwich Castle Keep.  The floor transformed into a medieval campsite and the tarpaulins hung from high, breaking the keep into different sections.

Tales of Magical Realism: Part 2 - by Sven Warner was a great way to spend time on a Sunday afternoon.  Stepping into part of the studio at Epic, this told a gripping story which took you on a virtual journey by train and car all by the clever use of miniature peep shows, headphones and an ipod.  Oh and an exercise bike. Magical.

City by Funki Porcini.  To say this is a panoramic film of a city a night does not in any way do it justice.  The use of sound from the road, planes and trains served to transport you there and then gave you the sensation of eavesdropping as the camera zoomed in on random offices and conversations.

These last five wonderfully inventive shows and installations I’ve talked about above not only shows how diverse the festival is, but also the accessibility to all.  All of the above cost me £5 in total.  From that I’ve experienced comedy, drama, art and film.  You can’t say that very often and that makes me very happy.  Even more so, that this all takes place in my home city of Norwich.  It’s going to be a long wait to the 2014 Festival!