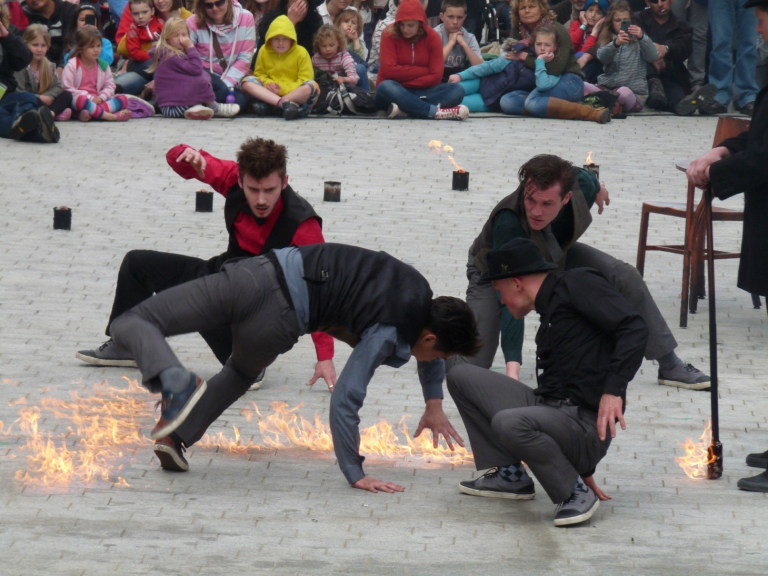 A ‘mostly’ sunny Sunday afternoon in May.  What better way to spend half an hour or so than at one of the many amazing free street performance events, which are part of this year’s Norfolk & Norwich Festival.

I’m very glad we did.

‘Faust’ was performed by ‘Bad Taste Company’ on Saturday 11 and Sunday 12 May on Millennium Plain, Norwich.

This inventive take on the Goethe Classic brought together breaking, which is a form of street dance, with big band music and dancing of the 1920’s.  These new and old styles worked seamlessly together, which was quite something to behold.

The set itself was very simple, just a couple of tables, a few chairs, couple of tankards as props and with a backdrop with the letters ‘F.A.U.S.T’ set on some kind of steel structure.  Simple yes, but looks can be deceiving and this was more than enough to fuel the audiences imagination as parts of this set literally came alight in flames.

The set was a local bar, the bartender and staff, the Devil’s handymen.  One unlucky customer who calls in to quench his thirst gets drawn into temptation.

As each scene progressed the music and dance changed from upbeat numbers to slow, darker, thumping beats as the ‘boss’ arrived to take charge.

The penultimate scene made clever use of ropes, chairs and fire to create a flaming boxing ring where the customer is fighting for the right to his soul.

This performance was engaging, exciting and energetic.  The dancing was breathtaking and the different styles fused perfectly.

I’m very glad we caught this performance and it left me wanting to see it all over again, you could say the temptation to join in was almost too much!