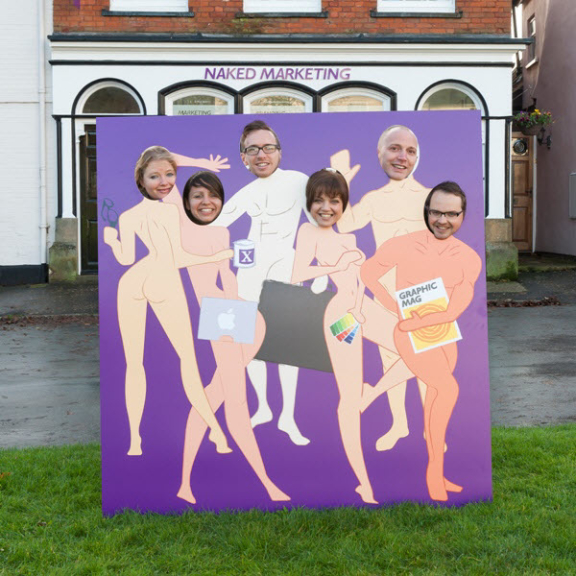 What do you do to celebrate 10 years in business? Go naked of course.

During this time they have been serving international and local clients and have achieved in excess of £4m gross turnover to date.

Despite a double-dip recession, since its inception in 2002 the full-service agency has doubled in size, appointed a Non-Executive Director, purchased its own business premises in Hingham Norfolk, and received various trade awards.

“We’re thrilled not only to be in business ten years on but to actually be thriving in spite of the current economic climate,” says Ben Handford, Managing Director and co-founder, Naked Marketing. “We remain as excited about each milestone as we were when we sent out our first ever invoice, and banked our first cheque - they’re now just bigger, like buying our own building, and working with some of the world’s biggest brands.”

“We treat our customers equally regardless of the scope or scale of their project,” explains Ben. “We’re optimistic we’ll continue to grow this way, by living our ‘Naked’ philosophy: being transparent, honest and attentive in our business relationships, and maintaining our quality of work.”

Naked Marketing recently received the Business Partnership Award from Mind and were runners up at Hello Kitty’s design day annual awards. Naked were also delighted earlier this year when they were recognised as one of the first businesses in Norfolk to receive the Carbon Charter award.

And the people in the photograph?

From Left to right

Marketing in Norwich
To see the businesses in our Marketing section, please click here.
Latest Articles