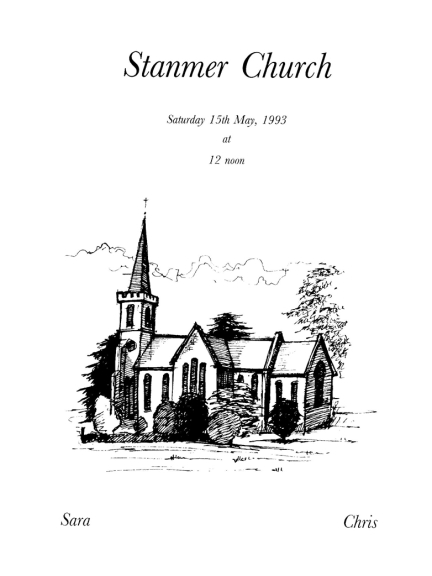 Did you know that we have been married 20 years? To this day I'm not sure if we were properly married.

How do you get married in a church and not be properly married?

Well, we wanted to marry in a church near where we met. This meant that we had to obtain a special licence. We lived in London at the time, and I remember going into an office linked to Westminster Cathedral to get our licence. (Formally known as the Faculty Office for the Archbishop of Canterbury's Special Licence.)

From this office next to the soaring spires of the Cathedral, we obtained our licence to marry in a small country church in the middle of nowhere.

The excitement of planning a wedding overtook my life for the best part of a year.

Weekends were spent looking at wedding venues, sourcing the wedding photographer, the florist, the wedding cars.

Because we no longer lived in the area, we went by word of mouth recommendation for many of these wedding suppliers. Nowadays, of course, we would also be relying on the web, looking at websites like The Best of Norwich, to find recommended wedding suppliers, to read reviews, to look at their websites and see whether we liked the people behind the business.

20 years ago, we relied on introductions from other wedding suppliers.

Because very few of our friends and family lived nearby, most of the guests stayed in local accommodation.

For our wedding reception, we chose a lovely big hotel, set in its own grounds, complete with spa and beauty salon, which meant that many guests could stay overnight in the same venue, and enjoy the evening without worrying about driving.

I remember waking up on the morning of my wedding in the large room that I shared with my bridesmaid, and seeing with relief that the sun shining through the window, albeit with some clouds threatening in the distance.

As I sat luxuriating in the large clean bed, with its white cotton sheets, I ordered a cooked breakfast. We were giggling already as we went through the cooked breakfast options on the phone.

Eggs? No
Bacon? No
Sausages? No
Beans? No

My plan had been to eat as much as I could before the main ceremony - I get very bad tempered and very shaky when I don't eat properly. The last thing my guests wanted was a grumpy / fainting bride. But when it came to ordering breakfast, my stomach was in knots, and in the end, all I could manage was some dry toast.

Next, the beautician and hairdresser arrived to work on our wedding hair and make- up. I was just getting dressed when my mother realised she needed some hat pins. There were no pins to be found, so she nipped into the nearby village to buy some.

Meanwhile the photographer arrived to take some pre-wedding photos. Right at the last minute, my mother returned, with hat pins, and the flowers arrived.

By this time we were running late. A few extra photos used up a few more minutes, then we all set off.

I say "all" because a lot of the guests had checked into the hotel and were going to follow us to the church as they did not know the way.

I had organised a surprise vintage car to collect the groom and ushers from their B&B. Meanwhile, I had a smart modern car to take me the 15 miles or so from the hotel to the church.

All went well, albeit that we were a few minutes late, until we reached the nearby village. There had been an accident and the high street was closed to traffic. My heart was pounding at the thought that we would be late. At that time we didn't have mobile phones, so Chris would have been standing at the church wondering what on earth had happened.

Our driver decided that rather than sit in a traffic jam, we would do a U- turn. He did a tight turn and made his way out of the village to find an alternative route. I looked behind, to see a a stream of other cars doing a hasty U- turn - all our guests frantically trying to follow us to find the way to the church. It looked like a comedy sketch. My mother was in an open top sports car being driven by my aunt, and I remember seeing her grab onto her hat whilst my aunt did the tight turn and zoomed off after us. Those hat pins weren't quite up to the job, after all!

We finally reached the dual carriageway and started speeding along. I looked at the speedometer, and looked at my uncle, (who was acting as the father-of-the-bride).

The driver must have seen our worried glances:

"What did you do in the police?" We asked, out of interest, thinking he would talk about high speed chases or traffic control.

"Dog handler" came the reply as we continued speeding our way to my wedding.

My uncle and I burst into laughter, momentarily forgetting our worry about being late.

In the end, we arrived there only 32 minutes late.

Our special licence said we had to be married within 30 minutes of the planned time.

I think our vicar decided not to quibble about the 2 minutes and carried on with the ceremony.

I wonder whether anyone has actually been refused a marriage on these grounds.

So, that is how I arrived late for my wedding after speeding there with a former dog handler.

And I won't even mention how I ended up sitting on the bed chatting to my naked father-in- law, or how someone's underpants got left behind in the sauna, or how my uncle made a speech about mother in laws, offending all the mother-in-laws in the room. Now that would just be telling tales.

If you are planning a wedding in Norwich or Norfolk and are looking for wedding suppliers in Norwich, we have a great selection of recommended businesses.

I can help you find the suppliers to make your day memorable for all the RIGHT reasons!

By the way, the image of the church was drawn by my brother for the Order of Service.

Weddings in Norwich
To see the businesses in our Weddings section, please click here.
Latest Articles