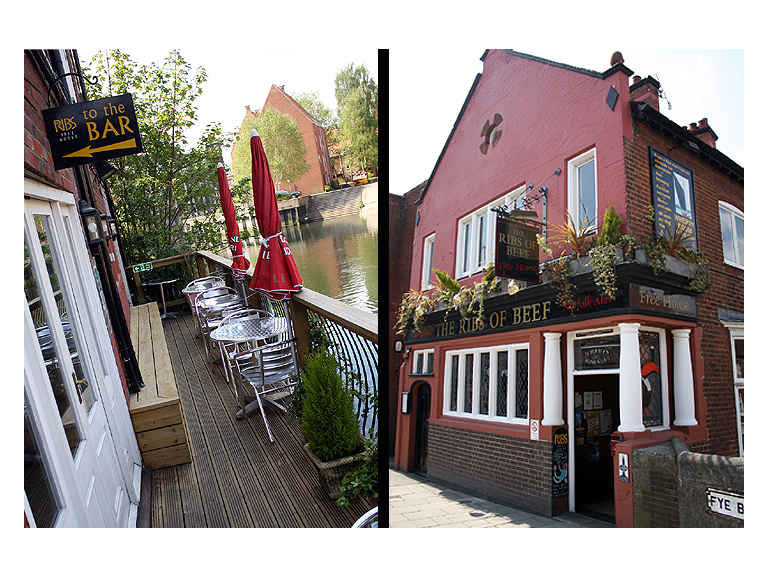 I know it must be the most over-used point of reference when talking about the pubs of Norwich and yes, I'm sure you've all heard it before, but here goes; they say that Norwich used to have a pub for every day of the year.

I've always thought this a rather strange statistic; what date does 'used to' relate to, where do you draw the boundaries of the city, what are you classing as a 'pub', and so on. If you really want to get into the semantics of it you could have a look here. But if you just want to find a great place to drink in Norwich now then read on.

Whilst Norwich may not have 365 traditional pubs these days, what it lacks in number it more than makes up for in quality.

A fantastic place to start any tour of the city's pubs is The Ribs Of Beef on Wensum Street. Perched on the edge of the river by Fye Bridge, it offers a great selection of beverages as well as a satisfying range of food including toasted sandwiches, burgers, Sunday roasts and traditional pub fare. But probably the best thing is the balcony that hangs over the river. You can sit and enjoy a cold drink, catch the sun and forget that you're in the centre of Norwich.

If you're looking for a bit of history then the obvious candidate is The Adam & Eve. Dating back to the thirteenth century and the construction of the nearby cathedral, The Adam & Eve crops up in the city's history time and again. Most notably, it's claimed that Lord Sheffield died in the pub during Kett's rebellion in 1549. Being a pub it goes without saying that Lord Sheffield still frequents the building in spectral form! In fact the pub's supernatural claims make it the starting point of Norwich's famous Ghost Walks. Aside from the history, you'll find a traditional pub complete with benches, a snug and a fantastic range of ales. It also serves food.

Another pub with a rich history is The Murderers. Officially The Gardeners Arms, the pub is located on Timber Hill and dates back to 1530. Inside it's a satisfyingly labyrinthine building; set over several levels, wooden beams surround plenty of corners to snuggle down and enjoy your drink. It also shows various sporting events including football and has won numerous awards for its beer. Oh, and if you want to find out the story behind the name then watch this video. You never know, you may even spot yours truly!

If you want to sit outside then both The Lamb Inn and The Wig & Pen offer large outdoor seating areas. The former is located just steps from Gentleman's Walk where you can sit in the secluded courtyard and take a break from shopping. The latter is on Palace Plain, just down from Tombland, and offers beautiful views of the Cathedral spire. Both pubs also serve food.

Families are well catered for as well. The Eagle boasts a large garden where kids can run around while adults enjoy a drink and/or a meal. It also has ample parking space but is equally easily accessible from the city centre, sitting as it does on Newmarket Road.

Those who enjoy their drinks in a quirky environment should check out The Playhouse Bar. With the art college located nearby, it's understandably characteristic. Look up when you're waiting for your drink and check out the miniature city that’s gradually spreading across the ceiling. It's a million miles away from the sterile chain pubs that dominate many cities, with a lively clientele and good music. You can also enjoy your drink outside by the river or take in a show at The Playhouse itself.

Another pub that caters to the artistic crowd is The Birdcage on Pottergate. The beautiful art deco building houses a laidback bar with friendly staff. The pub regularly features works by local artists as well as hosting events. The Rumsey Wells on St Andrews Street also has a nice arty feel plus a lovely secluded beer garden that often hosts barbecues.

If it's a nice glass of wine you're after than both The Wine Cellar on Guildhall Hill and The Last Wine Bar on St Georges Street offer fabulous selections of wine; and for anybody who wants to sup on gorgeous local beer then the The Fat Cat Brewery on Lawson Road has to be top of the list.

I hate to say this but it may be nice and sunny now but give it a month or so and – ssshhhhh, whisper it - the temperature will start to drop. When that happens, a great place to head is The Coach and Horses on Bethel Street. Its walls are adorned with signed posters from The Theatre Royal and more importantly, it has a log fire! Settle down and you'll soon forget about the weather.

Of course there are many more great places to while away an evening but I've run out of space; just think of this as 'part one' for now! You know what? I'm beginning to believe that old adage about Norwich, pubs and days of the year!

Lives in Norwich and is constantly amazed when he discovers something fantastic in the city that he should probably have known about before! Works for various media type places and enjoys writing and exploring...