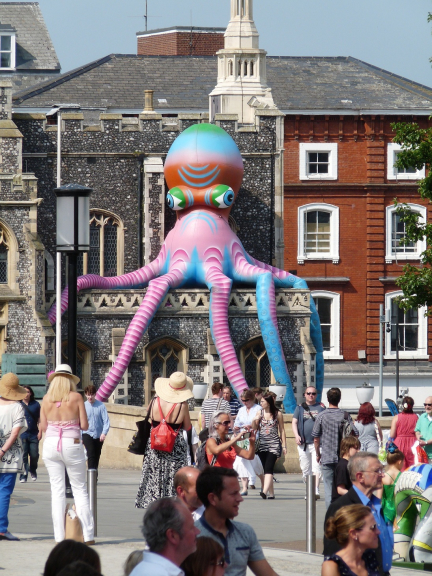 Every weekend is different. Some busy, some quiet, some at home, some away. What they all have in common is Friday night. Where it all begins.

Friday 5 July saw the start of the 'Lord Mayor's Celebrations', with events on until Sunday 7 July. The Jonathan Wyatt Big Band kicked off the weekend's events with an amazing three hour free concert outside The Forum, Norwich. With the weather being kind, seats were filled, steps sat on and there was even a space for keen dancers. After a hot and busy day at work, this was the start to the weekend.

Saturday saw the city centre turn into one big festival with stages springing up all across the city. You could enjoy local musicians on the Epic Stage on Brigg Street, relax in Chapelfield Gardens with the BBC Norfolk Introducing Stage, revel at the Bo Nanafana Stage on London Street or wander over to The Forum for a mix of entertainment from violinists for flamenco.

The Guildhall was also transformed and appeared to be under attack from a giant octopus!

It's hard to describe the atmostphere on the streets of Norwich when there are large events on. The Citzens of Norwich are out in force to support, enjoy and celebrate. And celebrate they did.

On Saturday afternoon the city centre streets were gradually closed to traffic and cleared in preparation for the Lord Mayor's Procession. This all started with the 5km road race at 4.45pm with the actual procession starting at 5pm. If you wanted a good vantage point it was good to arrive early. This year crowds lined the whole procession route, clapping, cheering, laughing. Floats ranging from local schools, dancing groups, radio stations, charities and more. All having worked hard to put together their piece of the procession. The sun shone down on dancing, music, colourful floats and outfits, as they keep this long-running tradition alive.

As the procession came to a close, I made my way back through the crowded streets - only to turn one corner and find a Scottish Pipe Band start up! The streets were alive with such a mix of entertainment and to be all brought to a perfect close with the firework display from the top of Norwich Castle at 10.30pm.

The fun didn't end there though. Sunday 7 July saw the Norwich Lanes Summer Fayre in St Benedict's Street, Pottergate and extending down to Bedford Street and Bridewell Alley this year. The lovely little eclectic 'Lanes' shops were all open, with live bands and singers playing, stalls on the streets, tea parties, games and so much more. St Benedict's Street thronged with people on this lovely sunny summer Sunday in Norwich.

If you've never experienced either the Lord Mayor's Celebrations or the Lanes Summer Fayre before, put them in your diary for next year now and get there early. You won't be disappointed!