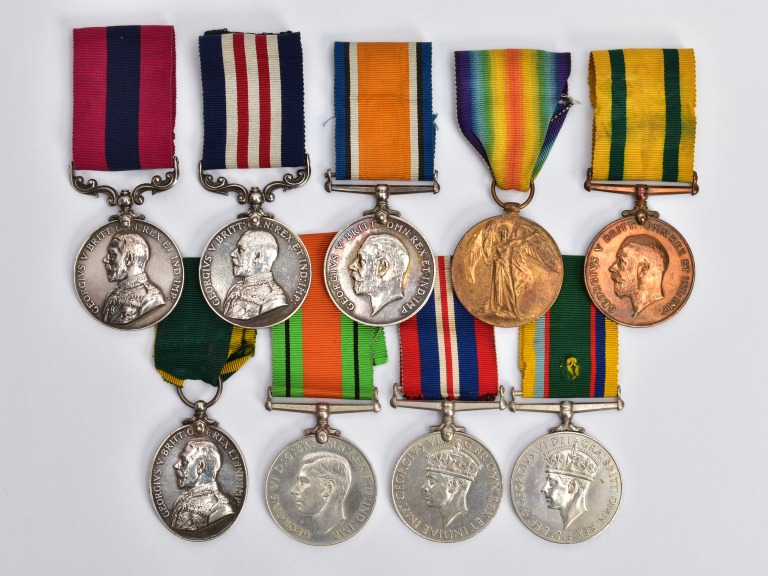 GALLANTRY medals awarded to a brave Midlands soldier who served in both world wars are set to sell for thousands of pounds when they go under the hammer later this month.

The ‘exceptional’ group to Percy Pearson – which includes the Military Medal and a Distinguished Conduct Medal for his heroics in World War One – is expected to fetch £4,000-£6,000 in Richard Winterton Auctioneers' Collectors Sale, from 10am on Tuesday, October 26.in TAMWORTH.

Company Sergeant Major Percy Pearson was awarded the Military Medal for ‘immediate award for his gallantry and devotion to duty’ at Kemmel during the second German offensive between April 12-17 1918.

He had previously been presented with a wound strip for actions on or around August 9 1917 and later in the war would be decorated with the Distinguished Conduct Medal for ‘marked gallantry and initiative’.

The citation said: “When his company attacked the Germans and reached their final objective near Montbrehain on October 3 1918, he noticed that their right flank was open.

“He immediately organised a strongpoint, which during the ensuing counterattack inflicted heavy losses on the enemy.

“When ammunition was running short he organised a party under heavy fire and got ammunition to the firing line.

“It was owing to his fine actions that the company was eventually able to repel the attack.”

Pearson went on to serve in the Home Guard during the Second World War – and in 1953 was the only WW2 Home Guard officer to be invited to the Queen’s Coronation parade.

He retired from a role in the Army Cadet Force in 1955.

“Pearson represented his regiment with distinction throughout the First World War and beyond into WW2 and then later in the Cadet Force role.

“His military service and phenomenal bravery is extremely well documented but details of Pearson’s early life are still clouded by the mists of time, as is information about his latter years.

“As such, there is still plenty of scope for further research to find out more about this exemplary soldier who devoted himself to his country.”

Pearson, of Woodhouse Street, Woodville, near Swadlincote, served with the Nottingham and Derby Regiment throughout the First World War.

The WW1 Notts and Derby Regiment formed part of the 46th North Midland Division and saw much action in the conflict on the Somme battlefields and later in the First World War at Kemmel in Flanders, Belgium, and attacks on the infamous Hindenburg Line German defences.

His deeds were to be later recorded in a book, British Gallantry awards – The Sherwood Foresters 1854-1970.

All are named to Pearson except the WW2 Defence and War medals which were unnamed as issued.

An associated ephemera collection includes letters and contemporary news cuttings on the award of Pearson’s medals.

The auction catalogue may be viewed online a week before the sale at www.richardwinterton.co.uk/auction-dates/.

Go green and TreeCycle this winter to support St Giles Hospice
Sign up for offers
Sign up for what's on guide
Become an author
Popular Categories
By clicking 'ACCEPT', you agree to the storing of cookies on your device to enhance site navigation, analyse site usage, and assist in our marketing efforts.
For more information on how we use cookies, please see our Cookie Policy.