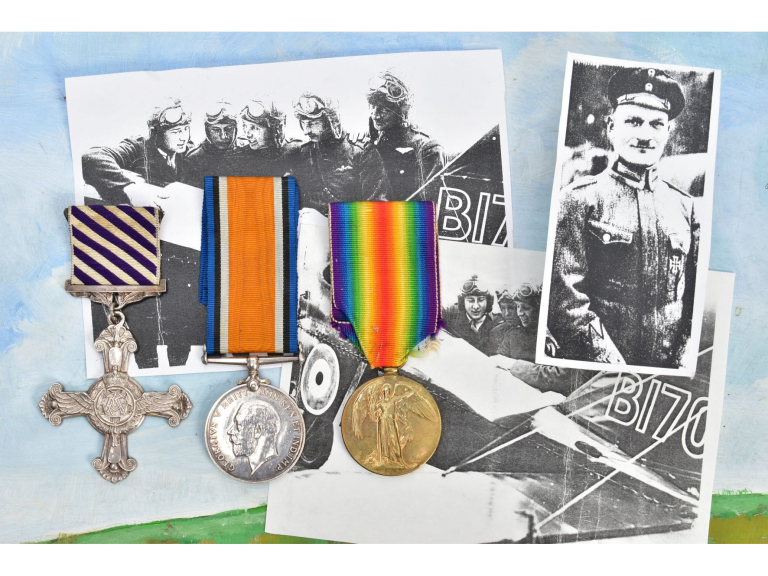 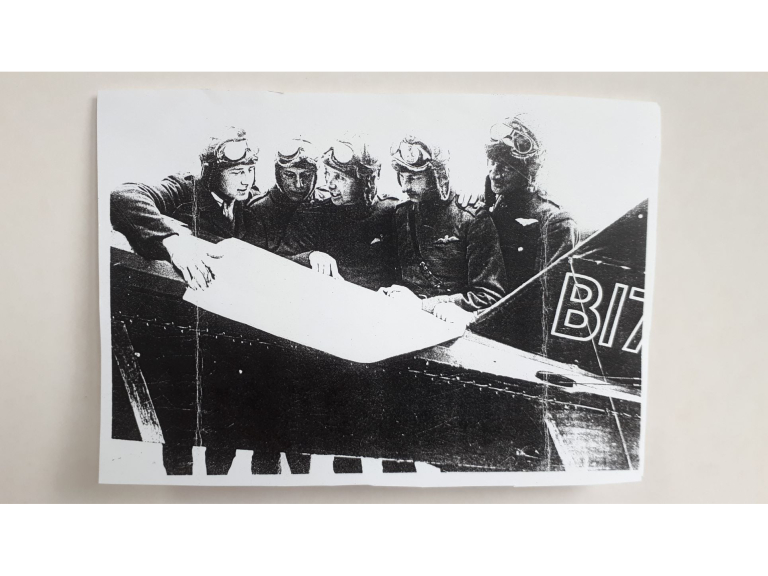 Originally the Distinguished Flying Cross was awarded unamed. The DFC has been awarded named to recipients only since 1984.

Lieutenant George Edgar Bruce Lawson's medals are to be sold with his named British War and Victory Medals plus an archive of associated paperwork, the 1918 DFC group is estimated to fetch in excess of £3,500 but could soar up to £6,000 in the Collectors Sale from 10am on Tuesday, November 23.

Hailing from Cape Town, Lawson was only one of eight South Africans to be awarded the DFC and was a fighter ace credited with six aerial victories.

Flying with the Allies in the First World War, the lieutenant was assigned to 32 Squadron in France in April 1918 and scored his first victory on June 7 1918.

He became a flying ace in September 1918 by downing five more enemy aircraft that month – the last of those and his second kill of September 27 was that of noted German ace Fritz Rumey, with whom Lawson collided in mid-air.

Rumey – who had 45 confirmed victories over allied pilots – baled out but his parachute failed and he plummeted to the ground.

Lawson limped his damaged biplane back to the safety of the British lines and was awarded the Distinguished Flying Cross for his actions.

He was just 19 years old at the time.

The citation read: “A pilot of courage and skill, bold in attack and gallant in action, who has accounted for five enemy aeroplanes.

“On September 27 he attacked 15 Fokker biplanes that were harassing one of our bombing formations, driving down one in flames.

“He then engaged a second; in the combat the two machines collided, and the enemy aeroplane fell down completely out of control.

“Although his machine was badly damaged, Lieutenant Lawson successfully regained our lines.”

Lawson remained with 32 Squadron until the end of the war and returned to South Africa, where he joined the South African Air Force.

He was killed in November 1922 at the age of 23 when a plane in which he was a passenger crashed.

“This is a truly unique and exceptional gallantry group of medals,” said Nick Thompson, militaria specialist at Richard Winterton Auctioneers.

“Lieutenant Lawson served with various squadrons but joined 32 Squadron in April 1918 in France.

“By this time he was flying SE5a aircraft – Royal Aircraft Factory British biplanes.

“On this day Lawson was sent with his squadron to intercept German fighters who were attacking British aircraft, bombing the German lines near Emerchicourt in northern France.

“He firstly shot down a Fokker DVII in flames, then turned his attention to another, who in the event would prove difficult to deal with.

“The planes were so close at one stage that the undercarriage of Lawson’s aircraft became entangled with the Fokker, causing the pilot to lose control.

“Realizing his aircraft was lost, the German jumped from his plane and tried to parachute to safety but his ’chute failed to open.

“This was the German air ace Leutnant Fritz Rumey, one of only five Germans to be awarded the Pour-le-merite and German Gold Military Merit Cross.

“At the time he met his death at the hands of Lawson, Rumey had 45 confirmed victories over allied pilots and was sixth on the list of the top 12 German aces of WW1, number one being Baron Manfred Von Richthofen aka the Red Baron.”

Born in Cape Town on April 26 1899, Lawson’s family moved to Johannesberg after the Boer War and the reunification of South Africa.

When the First World War broke out in 1914, Lawson travelled to England and joined the Royal Flying Corps to begin pilot training which would eventually lead to the duel with Rumey, eight years his senior.

“Born in Konigsberg on March 3 1891, the German’s First World War service began as an infantry soldier on the Russian front, where he was awarded the Iron Cross Second Class,” said Mr Thompson.

“Rumey applied for pilot training in August 1915 and went to the Western Front in early 1917, where he would become part of the ‘Golden Triumvirate’ with fellow airmen Josef Mai and Otto Konnecke.

“This group is a true ‘battle for the skies’ by brave pilots and in particular the young South African lieutenant.”

The catalogue may be viewed online a week before the sale at www.richardwinterton.co.uk/auction-dates/.

Lieutenant George Edgar Bruce Lawson’s DFC is sold with his British War and Victory Medals plus an archive of associated paperwork.

Lawson is pictured second on the left of this group of fliers.