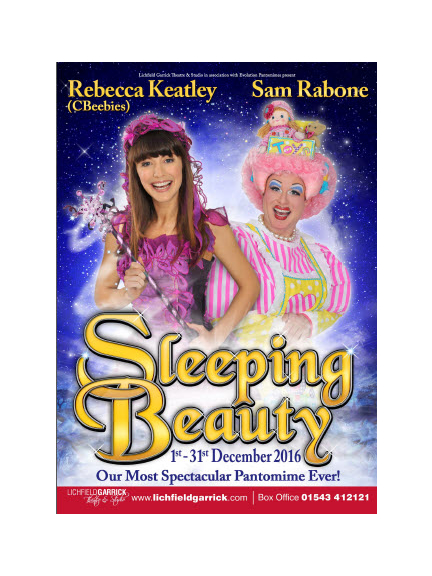 Ian Billings, who will make his Lichfield Garrick debut this winter, has directed and written several pantomimes as well as a number of books and plays. He is also a children’s stand-up comedian and has been seen on popular BBC television shows including ‘Doctors’ and ‘Chucklevision’. Ian joins the Garrick cast after a successful run performing in Telford Place Theatre’s annual pantomime.

Tim Ford, Artistic Director at the Garrick, said: “I am really looking forward to welcoming Ian and Ben to the Lichfield Garrick and know that Lichfield is in for a real treat Christmas, as we can expect many laughs and giggles from both Ian and Ben. I have known Ian for several years and I am personally thrilled he will be joining us as he brings a huge wealth of experience and expertise. He joins us having spent the last 8 years leading the Telford pantomime.”

Ben Thornton is another great edition to the line-up of Sleeping Beauty. He is a children’s entertainer and has toured across the UK with the ‘Octonauts’ and ‘In the Night Garden Live’. He has also appeared in big musicals such as ‘Oliver!’ and ‘Les Miserables’.

Ben’s television credits include BBC’s ‘People Just Do Nothing’, ‘London’s Burning’ on LWT, and The Disney Channel. Ben also specialises in puppetry and teaches in several UK drama schools. He is thrilled to be playing Jangles in Sleeping Beauty.

“I saw Ben last year in pantomime and loved his sense of fun, high speed energy and brilliant comic timing and know that he will be a wonderful addition to our company this year. I am sure both Ian and Ben will be a real hit with young and old alike and I cannot wait to get started” added Tim Ford.

Sleeping Beauty is the first pantomime at the Lichfield Garrick to be co-produced with Evolution Productions. Cbeebie’s Rebecca Keatley has been confirmed to play Fairy Moonbeam and Sutton Coldfield based dame, Sam Rabone will take on the role of Nurse Nellie. Further cast announcements for Sleeping Beauty will be made at the end of July.

The pantomime opens at the Lichfield Garrick on 1 December and runs until 31 December 2016. Tickets for all performances are on sale now, with a variety of schools, matinee and evening performances.

Tickets cost from £13 for children and from £22 for adults, and can be booked online at www.lichfieldgarrick.com or by calling the Box Office on 01543 412121.