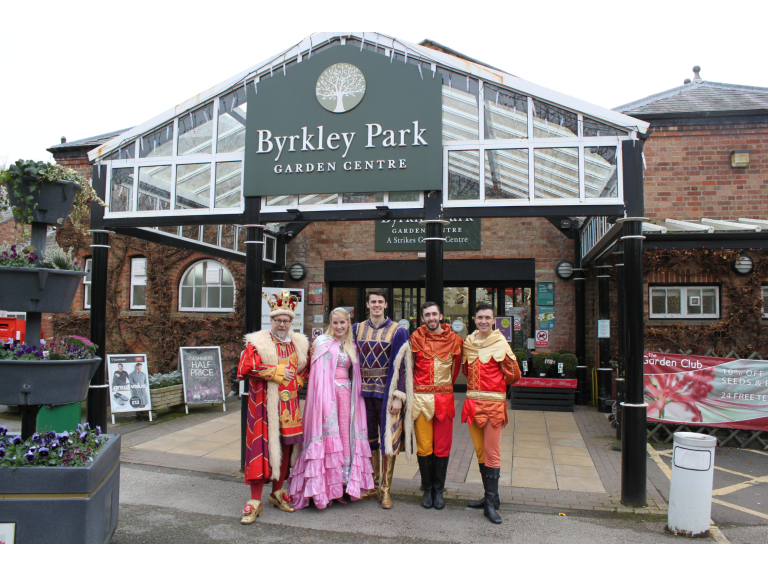 After three weeks of rehearsals, the cast of Sleeping Beauty is ready for the opening night on Thursday 1st December.

While preparing for the month-long run the performers have been out and about meeting lots of people within Lichfield and the surrounding district.

The cast turned the Christmas Lights on in Boldmere on 24th November and in Lichfield on 27th November, and opened Byrkley Park Garden Centre’s Sleeping Beauty themed Christmas Grotto on Saturday on 26th November.

Rebecca Keatley commented: “I'm extremely excited about performing in Sleeping Beauty. The rehearsal process has been incredible. Working with such a talented cast and crew has been a dream come true. For those who have already bought a ticket you're in for a treat, the music, set and script are truly magical, witty and entertaining. And, if you haven't bought a ticket, what are you waiting for?!? They're selling out fast.”

Children’s entertainer, Ben Thornton will also make his Lichfield Garrick debut as Jangles the Jester in the festive show.

Ben Thornton, added: “It’s been great to meet the people of Lichfield and I’m so excited to be spending Christmas in this beautiful city. I’m looking forward to bringing some fun, laughter and silliness to Sleeping Beauty. It’s going to be an amazing few weeks, don’t miss it!”

Sleeping Beauty promises to be the Garrick’s funniest and most magical pantomime ever, with a stellar line up, lavish sets and stunning special effects (there is even a fire-breathing dragon!)

The show runs at the Lichfield Garrick from Thursday 1st December to Saturday 31st December 2016, with a variety of school, matinee and evening performances.

For the first time, the theatre is running a signed performance of the pantomime on Wednesday 7th December at 1.30pm.

A number of performances have already sold out with others selling fast.