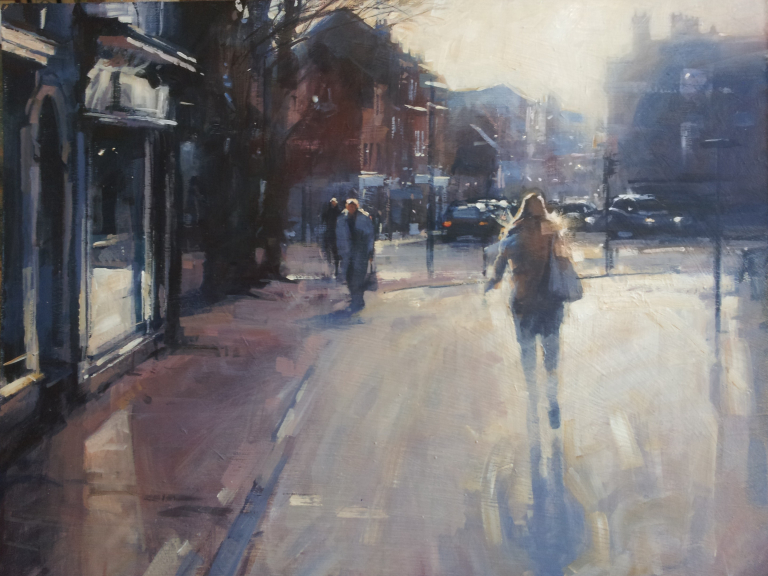 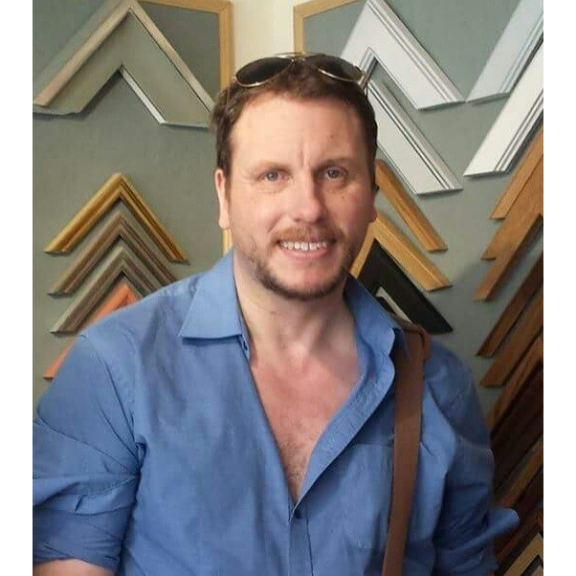 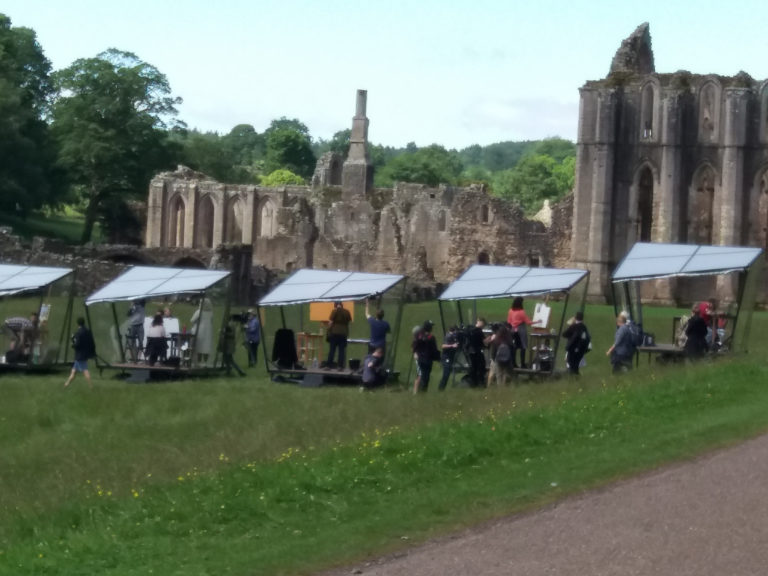 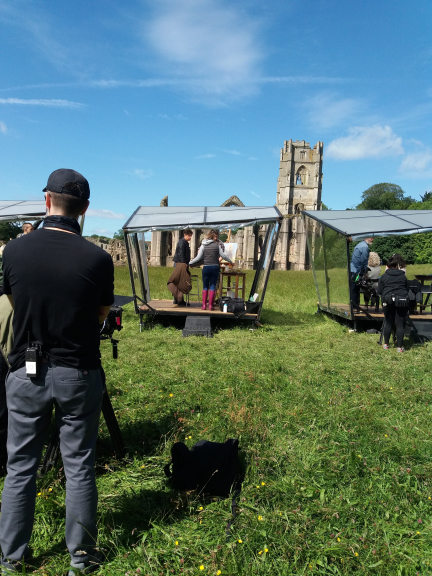 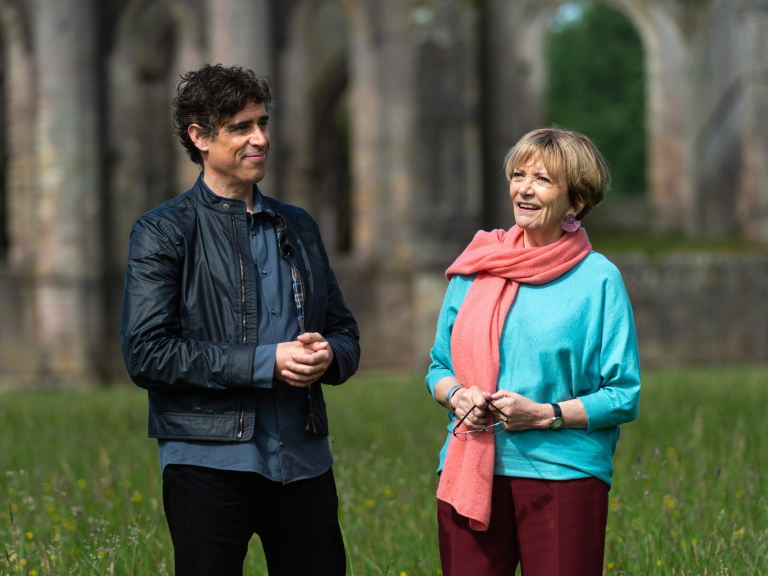 On Tuesday 16th October at 8pm, Carl Knibb ARBSA appeared on our TV screens in the first heat of Sky Arts Landscape Artist of the Year 2018. Staffordshire artist Carl Knibb from Lichfield had been chosen from hundreds to compete against eight artists and alongside a further 50 “wildcard” artists in the opening heat of this year’s Landscape Artist of the Year series, produced by award winning production company Storyvault Films.  The programme aired on Tuesday 16th October on Sky Arts at 8pm and this series is hosted by new co-presenter - actor and art-lover Stephen Mangan alongside Joan Bakewell. 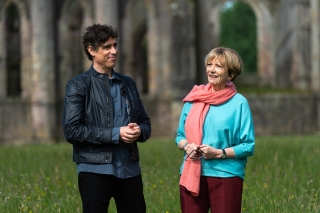 Carl is a professional artist, who was born in Birmingham but has been living and working in Lichfield, Staffordshire for nearly a decade. Carl is a long-time fan of this hugely popular TV art competition that has brought the work of some extraordinary artists into the public eye. 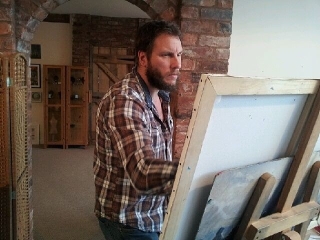 Almost 1600 entries were received for the 2018 competition, giving the judges the difficult task of whittling them down to 48 artists to compete in the six heats, several of which take place at National Trust locations: Fountains Abbey and Studley Royal in Yorkshire; Viking Bay, Broadstairs and Inveraray Castle in Scotland. Each heat is open to a further 50 “wildcard” artists who are invited to compete for a potential place in the semi-final.

The winner of Sky Arts Landscape Artist of the Year 2018 will receive a life changing opportunity for any artist, a prestigious commission from the Imperial War Museum to create an artwork to tie in with the centenary of the 1918 armistice.  He or she will travel along with an IWM historian to Macedonia, to visit one of the most unchanged battlefields of the campaign, the site of a significant defeat where British and Irish soldiers lost their lives. The finished work will be unveiled at the museum’s London HQ and enter the IWM’s collection to be put on display in the museum.

Carl commented: “When I applied to be a competitor I submitted a painting of Bird Street, Lichfield.  I really didn’t think I had any chance. Hundreds of fantastic artists send in their work every year, so when I got the call telling me I was through to the competition I was completely bowled over.”

Earlier this year, Carl, supported by his wife Joss, travelled to Rippon in Yorkshire where the very first heat was to take place at Fountains Abbey. Those taking part were challenged to create a piece of art depicting the Abbey – one of the largest and best-preserved ruined Cistercian monasteries in England.

Entering the famous ‘painting pods’, Carl and his fellow competitors had just four hours to try to capture something of the abbey’s grandeur. On a day that saw both bright blue skies and lowering cloud – this was a fascinating challenge.

The eight competitors all produced beautiful work, in mediums ranging from oils and watercolours to textile and digital art.

Members of the public were also on hand to watch the proceedings.

This is the fourth series of the show, which is produced by London and Glasgow-based independent production company Storyvault Films. “Landscapes” first aired three years ago following the enormous success of Sky’s Portrait Artist of the Year (PAOTY), also from Storyvault Films, that has captured public imagination since its launch in 2013.  LAOTY boasts the titles of “best-performing, non-scripted series of all time” and second-biggest series ever for Sky Arts, with viewing figures growing over the course of the series.

Sky Art’s Landscape Artist of the Year is hosted by new co-presenter - actor and art-lover Stephen Mangan alongside Joan Bakewell. Joan and Stephen are hugely excited to see what this year will bring and Joan says: “It’s always fascinating to watch the artists grow and evolve their style throughout the programme and witness the incredible creativity in their interpretations of beautiful British landscapes – and to witness the debate amongst both the judges and viewers over which artist they believe to be the most worthy winner.”

The judges are artist Tai Shan Schierenberg and independent curators Kate Bryan and Kathleen Soriano.  The show not only highlights the tremendous artistic talent across the country, but also how the beautiful British countryside has inspired past and present generations of artists.

Carl added: “Both the judges and the presenters were very kind and interested in what we were trying to create. It was a great experience.”

During his heat, Carl, painting in acrylics on board, initially created a quick concept sketch before moving on to the final piece.

At the end of Carl’s heat, the competitors were gathered together in-front of the cameras to find out who the three initial shortlisted artists were. The final winner would be picked from this shortlist. Carl was delighted to be picked as one of the shortlisted artists, and astounded when it was announced that he was the winner of his heat!

Carl said: ”I had genuinely decided that, as the quality of the work was so good, I was unlikely to win, and was just happy to have met such wonderful fellow artists. I had not painted en plein air for quite some time so was rather rusty. To be picked as the winner was humbling and wonderful.”

Carl will go through to the Semi-Final at Felixstowe Docks airing on 27th November, and the three chosen artists from there, will then compete in the final in Greenwich Park which airs on 4th December.

Carl sells his paintings to collectors both in the UK and internationally, and his work is available to view in galleries such as Artifex in Sutton Coldfield. Carls work has appeared on magazine covers and he was the winner of 2016’s ‘Capture the Cathedral’ competition, where his painting ‘Pilgrims’ was hung alongside works by J.M.W.Turner within Lichfield Cathedral.

We are spoiled  as we can see Carl’s works in progress at his studio at No.75, The Arches, Curborough Countryside Centre, Watery Lane, Lichfield, Staffordshire, WS13 8ES.