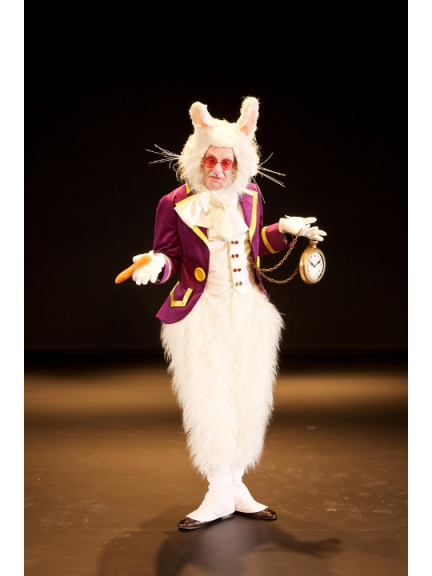 Lichfield Garrick is proud to announce this year’s Christmas show is a musical production of the popular tale, Alice in Wonderland with a circus twist.

From the creative team behind 2011’s record breaking production of A Christmas Carol, comes another glittering adaptation of a classic tale. Set in a Christmas circus, Lewis Carroll’s timeless story will take the whole family on a journey to Wonderland. It will have all the favourite characters, from the White Rabbit to the Mad Hatter, and March Hare, will appear in this all singing all dancing extravaganza, not to forget the wicked Queen of Hearts. Follow Alice as she falls down the rabbit hole in to a wonderful, colourful world of mirth and magic. All the razzle dazzle of the big top will be brought vividly to life with spectacular scenery, colourful costumes and a toe tapping score performed live on stage by the Lichfield Garrick’s circus band.

Star of screen and stage Steve Huison will head the West End cast as the White Rabbit. Steve played Mr Byron in CBBC’s hit TV show, The 4 O’clock Club, and is also well known by millions for his role as Eddie Windass in Coronation Street, and Lomper in the smash hit film The Full Monty.

Adrian Jackson, Lichfield Garrick’s Artistic and Executive Director, said, “Alice in Wonderland is set to be our most extravagant festive show yet! The whole theatre will be transformed into a Christmas wonderland. From the moment you step over the threshold into the theatre you will be entertained by circus performers, and there will be opportunities for children to try out their skills. “I’m thrilled that Steve Huison will be starring in this year’s show. Steve is a very talented actor and is widely known. He has wealth of experience and, with starring in Coronation Street and CBBC’s The 4 o’clock Club, Steve will appeal to all ages.”

Alice in Wonderland will run at the Lichfield Garrick from Thursday 6 December 2012 until Sunday 6 January 2013, with a variety of schools, matinee and evening performances. Tickets cost from £12.50 for children and, from £20 for adults. To book contact Lichfield Garrick Box Office on 01543 412121, or visit www.lichfieldgarrick.com.

So, join us this Christmas for Alice in Wonderland, where she will be joined by a cast of incredible characters... oh and make sure you are not late for this very important date!