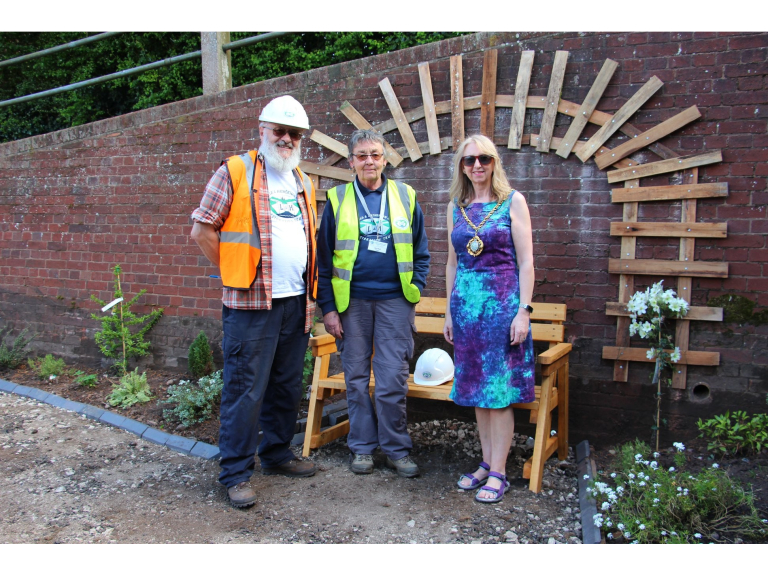 The garden will become part of Blooming Lichfield’s entry for Britain in Bloom, the nationwide community gardening competition led by the Royal Horticultural Society.

Gallows Wharf, near the junction of London Road and Tamworth Road, is on the route of the Lichfield Canal, which is being restored by Lichfield and Hatherton Canals Restoration Trust.

It is close to the site of the city’s gallows, originally erected in 1532, where on June 1, 1810, the last three men to be hanged in Lichfield met their fate, for forging and uttering forged banknotes.

It was also at Gallows Wharf that stained glass windows rescued from a dissolved abbey in Herkenrode, Belgium, were unloaded from canal boats on their way to Lichfield Cathedral in 1803.

The Mayor of Lichfield, Councillor Janice Greaves, launched the Garden of Reflection project on Thursday May 10 by unveiling a bench set in a small planted area and planting an oak tree.

Councillor  Greaves said: “I hope many people will stop along here, will sit here and reflect.”

The Trust’s engineering director Peter Buck explained that on the opposite side of the canal a garden representing the original wharf with two crane bases and a large container will be planted up and made ready for the Britain in Bloom competition judging in July.

“Gallows Wharf is a historic part of the canal, and the city. It was here when the canal was built in 1797,” he said.

“Today is the project launch of the Lichfield in Bloom work that we are doing at Gallows Wharf.

“We’d like to thank Councillor Colin Greatorex of Staffordshire County Council who provided a grant that kickstarted this work off.

“Literally eight weeks ago there was nothing here, no flower beds, no trellis, none of the work on the wharf. This has all been carried out by our volunteers.”

Another part of the Trust’s contribution to Blooming Lichfield is taking shape a little way down Tamworth Road where a representation of a 70ft narrow boat is being built by students from Queens Croft School and the Foresters Scout Group with help from the Trust’s chairperson Christine Bull. 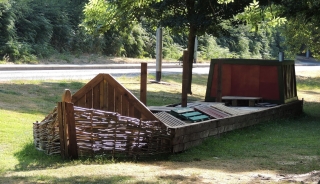 Flowers will be planted along the length the boat, which is being made using wooden pallets and willow cuttings and a cabin built by Trust volunteer Tony Cadwallader.

The judging for Blooming Lichfield will take place on Thursday 26th July.