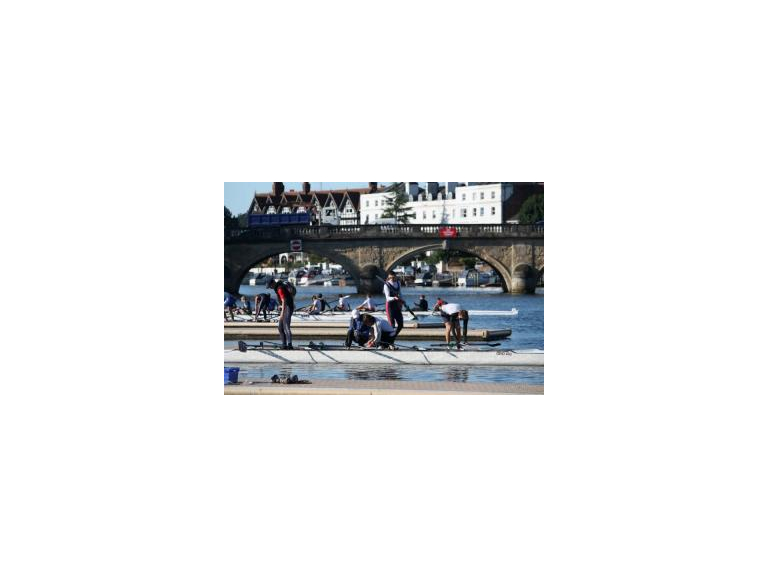 The racing timetable for each day will be posted shortly after racing.

The hours during which racing takes place each day vary with the number of entries received but in recent years the following general pattern has proved fairly consistent:

Getting Here and Regatta Car Parks

The roads approaching Henley will be busy and subject to a one-way system and restrictions during the Regatta. Main approach roads will be reinforced by temporary signage.  Please plan your journey carefully and allow extra travelling time.

There are good bus and rail links to Henley town, for further information see links below.

Car parking spaces are available on the Regatta site and it is advisable to purchase daily parking labels in advance.

The one-way system in Remenham changes at approximately 4.00 p.m. daily.  Follow the road signs on arrival and departure.

Failure to follow the road traffic signs that enforce the temporary traffic orders may render you liable to fixed penalties that include the endorsement of your driving licence.

This year there will be two bus services travelling to both Reading and High Wycombe at a cost of £7 per person.

On Friday 5th July and Saturday 6th July, there is a bus service leaving from Henley Railway Coach Station (HR1) to Reading Bus Station, the first bus will leave at 10.30pm and operate every 20 minutes until 02.30am inclusive.

On Saturday 6th July, there is a bus service leaving from Hart Street, Henley (HR2) to High Wycombe Railway Station leaving at 00.30am.

Trains run frequently to Henley from London (Paddington) and a special timetable is implemented by First Great Western for the duration of the Regatta.

Olympic Champions from London 2012 will be keen to show their paces at this year’s Royal Regatta, aiming to prove that they can succeed in the side by side, knock-out format found at Henley as well as in the six lane Olympic format.

British gold medallists like Andy Triggs Hodge, Pete Reed, Alex Gregory and Helen Glover look set to be amongst a strong home contingent, giving them the chance to row in front of the Henley crowd for the first time since winning their 2012 medals.

The two Olympic Champions in Single Sculls – Mahe Drysdale from New Zealand and Mirka Knapkova from the Czech Republic – will attempt to regain the Henley Trophies that they have held before.

Knapkova has won The Princess Royal Challenge Cup twice but will encounter a fierce challenge from Emma Twigg from New Zealand who finished fourth in last year’s London Olympics.

The New Zealand Olympic Champions in the Men’s Pair – Eric Murray and Hamish Bond – will want to continue their long, unbeaten run by winning The Silver Goblets for the third time. In The Double Sculls their New Zealand team mates, the newly formed combination of Michael Arms and Robert Manson, will encounter stiff competition from the newly formed British double of Bill Lucas and Matt Langridge.

The GB Rowing Team has entered 13 crews in eight top events. Triggs Hodge, Reed and Gregory will appear in The Grand Challenge Cup for Eights, rowing as Leander Club and Molesey Boat Club. Their opponents will be the Polish National Eight, rowing as WKS Zawisza and RTW Lotto, and the undefeated American University Champions from the University of Washington.

Helen Glover, winner of the first Olympic Gold Medal for Team GB last year, when she and Heather Stanning won the Women’s Pair title, is to be found in the British first quad, racing as Leander Club and Minerva Bath Rowing Club, in The Princess Grace Challenge Cup.

The Princess Elizabeth Challenge Cup for School Eights will see Abingdon School seeking to defend the trophy that they won last year but with strong competition from the top UK rowing schools as well as from Australia (Scotch College), the USA (Boston College) and Germany (Poelchau Oberschule).

A total of 470 crews have entered this year’s Regatta, including 86 crews from 22 overseas countries.

The Chairman of the Committee of Management, Mike Sweeney, said “In this post Olympic year I am very pleased to welcome so many London Olympians to this year’s Regatta. In the club, student and school events we have another huge entry and can be certain of a great week’s racing.”