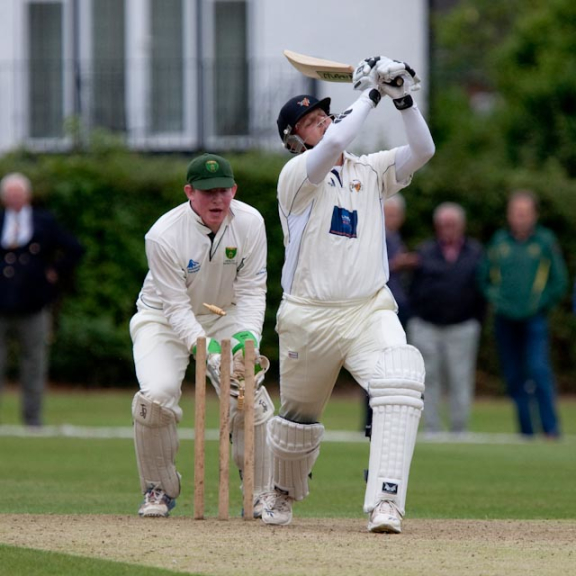 On a cold and blustery Sunday at High Wycombe's ground Henley easily beat Preston Nomads from Sussex in the first game by restricting them to only 122, before knocking the runs off with a few overs to spare. Good tight bowling from Henley was the key with all the bowlers performing well.Crowe was the pick with 3 wickets for only 21 runs. Good knocks from Mordt and Mclean ably supported by Allaway, Barnes and Crowe saw Henley home with 5 overs to spare

In the second game of the day against a strong Vauxhall Mallards team from Norfolk Henley again emerged victorious to go through to the last eight of the national competition. They will play London area winners on 13th September. And what a game it was!

Vauxhall Mallards batted first and a big total was on as Robert Purton batted brilliantly for a quick fire 65 before being caught by Allaway off of the bowling of Brock. When the field went back Henley were able to start to slow the run rate with tight bowling from Brock and Crowe. Andrew White and Tom Lambert were also able to restrain Vauxhall. Highlight was a superb catch from Brock on the boundary to dismiss Shipley. Vauxhall posted a target of 160.

Henley quickly lost skipper Mordt, however Allaway was in superb form hitting the bowling to all corners, including Chris Johnson's car grill! He made a quickfire 54 before being stumped. Henley kept losing wickets now but were able to stay in the game thanks especially to Carl Crowe. Roberts, Mclean and Barnes also contribute vital quick runs. 40 was needed off of 4 overs and after a very expensive penultimate over from Addsion only 4 was needed to win from the last over. A mix up on the first ball lead to Andrew White sacrficing his wicket to keep Crowe in. Next ball Crowe was caught for a vital 31. Henley still needed 4 to win with 2 wickets remaining with Henley youngsters Brock and Davison at the crease. However one way or another Henley scraped home with a single scored each, a wide and a leg bye. I think! All with one ball to spare.

A fantastically exciting game and great to see two of Henley's academy players win the game in the final over. Good luck to the team for the regional final palyed on 13th September-venue and opposition to be announced.

This Saturday coming is also very exciting for Henley CC with the first, second and third elevens all in with a chance of winning their respective leagues. Henley Firsts play in the Home Counties Premier League and are in first place with one game to play. They are 17 points clear of Banbury, and play local rivals High Wycombe in their final game this Saturday.

Henley 2nds are in the Thames Valley League, Division 2b and are in second place 12 points behind Cove. They play local rivals Kidmore End on Saturday. The Thirds are also in second place and ironically Cove are first by 11 points. They are playing each other on Saturday in what should be a very exciting finale.

Good luck to all three teams on Saturday. I play in the fourths for Henley and we are in third place, with Hurst and Theale likely to be promoted.