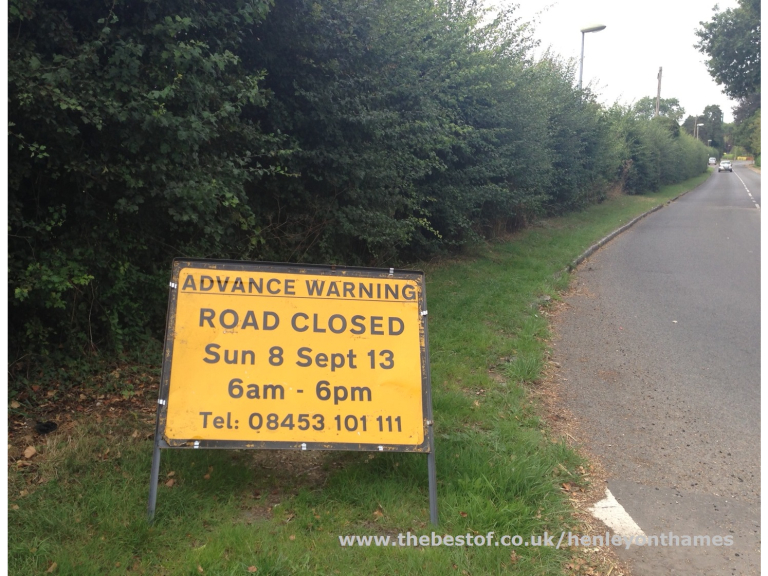 Are you ready for Challenge Henley this Sunday, 8th September?  Now in its third year the event is a challenging triathlon or a half triathlon for those who aren’t so brave.  The triathlon starts with a swim of 3.8km along the River Thames including the famous Royal Regatta course, a 180km cycle through the Chilterns and a 42km run through Henley and along the River Thames. The organisers obviously chose Henley for its attractive location not far from London but this event will provide another challenge for some residents and visitors to the town this weekend.

The Bike ride will take place on closed roads which is obviously going to prove an issue for residents along the planned route. The organisers will provide motorcycle escorts for visitors leaving and returning to their homes. The road closures will start at 4am on Sunday morning and on their website the organisers promise to start reopening the roads on a rolling basis from 2pm.

The event will also close 2 roads that transport traffic through or around Henley to other towns in Oxfordshire.  Essentially the A4130 road will be closed from the start of The Fairmile at Northfield End through Nettlebed to Nuffield. The B481 will be closed at Bolts Cross to Nettlebed and from Nettlebed to Watlington. In addition Greys Road will also be closed from Gillotts Corner to Bolts Cross. This means that travelling anywhere West to North of Henley is going to be really difficult.

Detailed information and a map can be found on the Challenge Henley website.

On the plus side a team from our business members Complete Physiotherapy are not only the physiotherapists for the event but are also entering a team.  Challenge Henley has also chosen Sue Ryder as their charity again this year.

This event has caused a very mixed reaction. What is your view of this event?