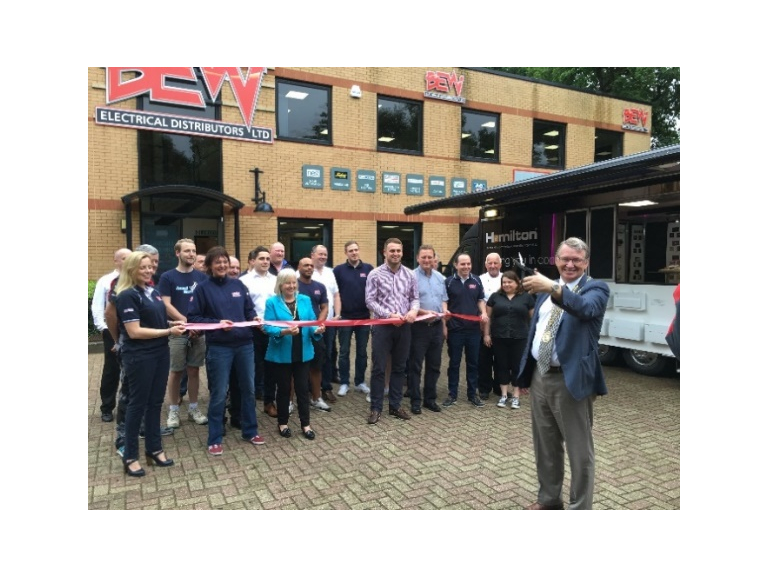 It might not have moved far, but the opening of newly relocated BEW Guildford was certainly something to celebrate.

We had a brilliant trade day at BEW Guildford on the 23rd of June.  The branch opening was a great success.  We were delighted to be joined by the Mayor of Guildford, Cllr Gordon Jackson and his wife Mayoress Sue Jackson, who officially opened BEW’s new branch.

There was a fabulous turnout that made for a really buzzing atmosphere with so many electricians and contractors attending the trade day, enjoying the delicious food and talking to innovative suppliers that were there.

There was lots of activity during the day, with Kewtech offering discounted meter calibrations to all electricians.  Alongside the discounted calibration, Nest, Snickers Workwear, Hamilton, B.E.G, Robus and Armeg all took part in the day and talked about new innovative products available to the market place.

Reinforcing the importance of small businesses to our local communities, Derek Carr from the Federation of Small Businesses came along to give support to the event. “The FSB is proud to support local business,” said Carr. “We are delighted to see the work BEW Guildford is doing to support local electricians and contractors."

Enjoying the bustling atmosphere, James Blason, BEW Guildford Branch Manager, was clearly delighted with the day and said: "Great to be part of such a successful trade day. Thank you to everyone who has supported the day. Great to see so many customers both old and new."

We are open if you want to drop by to see our new premises and meet the team at Unit 4 Moorfield Centre, Slyfield Industrial Estate, Moorfield Road, Guildford GU1 1RA!