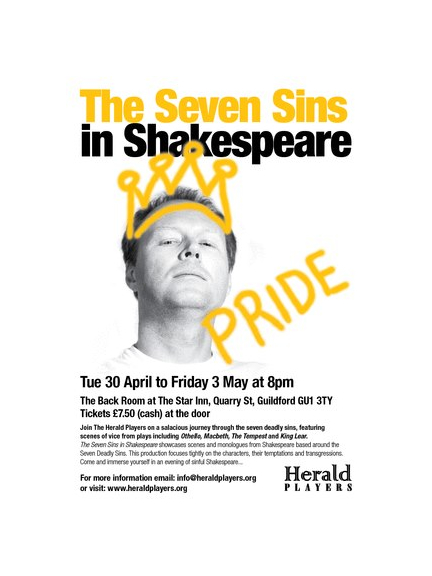 It’s easy to take sin too lightly. It’s easy to think that modern inventions can fix our misdemeanours: bank loans for the envious, weight loss surgery for the gluttonous, contraception for the lustful, counselling for the angry, home working for the slothful (!). But that’s only the surface. Real sin lies more deeply than that and can do a great deal of damage. Not only is that a lesson for us all...but also promises some cracking theatre, as much today as it did four hundred years ago!

One of Guildford’s foremost amateur dramatics societies, the Herald Players, bring their new production, Seven Sins in Shakespeare, to the Star Inn on Quarry Street all this week from Tuesday 30 April to Friday 3 May. They’ve opened their Complete Works of Shakespeare and found all the good bits, all the thought-provoking bits and all the cathartic bits and brought them together to highlight and explore the seven deadly sins: greed, gluttony, lust, sloth, anger, envy and pride. The audience will see scenes from Twelfth Night, Othello, King Lear and many other famous plays.   The Herald Players perform every night this week at 8pm and tickets can be bought at the door for just £7.50 (cash only please)

Check out the Herald Players website or join their Facebook group and keep up to date with all the information about their latest show and future productions.