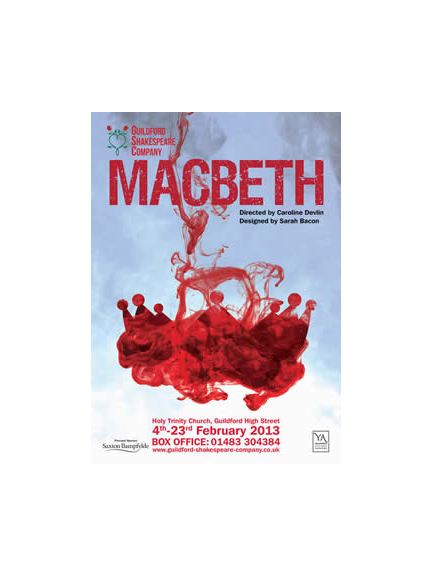 February 2013 brings the Guildford Shakespeare Company' s new production of Macbeth to Guildford! The dark and classic play, probably the most famous of Shakespeare' s tragedies, will be staged in the round at Holy Trinity Church on Guildford High Street from 4-.23 February  2013. Performances commence at 7.30pm every night except Sunday and there are also Saturday matinees at 2.30.

In addition to the plays two-week run, the Guildford Shakespeare Company is also offering a post-show discussion on 14 February, a talk from historian Fiona Watson on the Real Macbeth on 9 February and a reading of Noah Lukeman' s fascinating sequel The Seed of Banquo on 20 February. 12-17yr olds can participate in the drama workshop on 19 February and the Guildford Shakespeare Company are also offering school workshop which can be booked via the website.