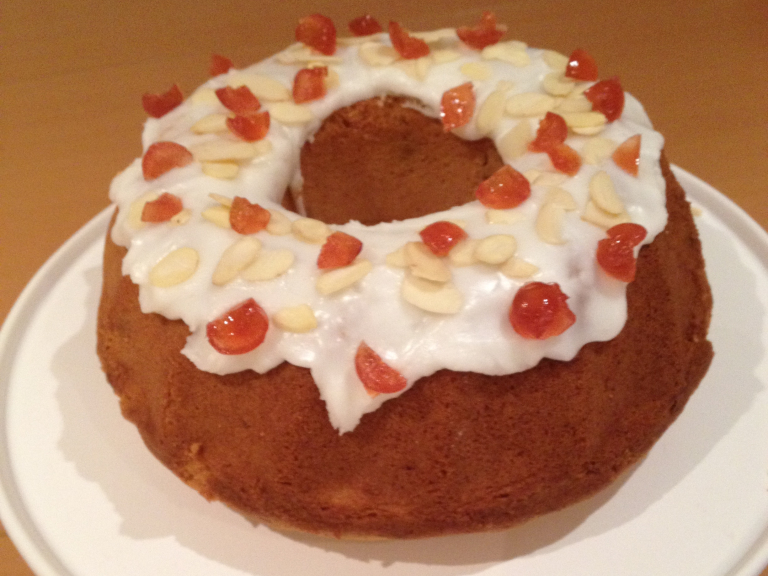 Having just watched and enjoyed the Great British Bake Off my 13 year old daughter wanted to try one of the technical challenges - although with the advantage of reading the full recipe beforehand. The recipe she chose was Mary Berry's cherry cake.

The ingredients are relatively straightforward, a variation on a basic sponge mix with the addition of ground almonds, lemon zest and cherries. The cherries in the sponge should be distributed evenly through the cake. Mary Berry achieved this by dusting in flour first - a great tip.

Using the juice of the lemon for the icing makes the flavour more interesting and the cherries and almonds on top add texture as well as decoration.

My daughter said the hardest part was waiting for the cake to cool which took a long time - so no wonder the Bake Off contestants were fanning their creations like mad!

And how did it taste? Delicious was our verdict. Perfect with a cup of tea. And 36 hours on it has all gone.

The contestants in The Bake Off challenge were allowed 2 1/2 hours to complete this challenge but it did take my daughter 4 hours from start to finish - at least with all that waiting about she was able to do the washing up too!

The recipe we used was Mary Berry's Cherry Cake from BBC Good Food.

Buy your Christmas Tree in Fleet in a COVID secure environment