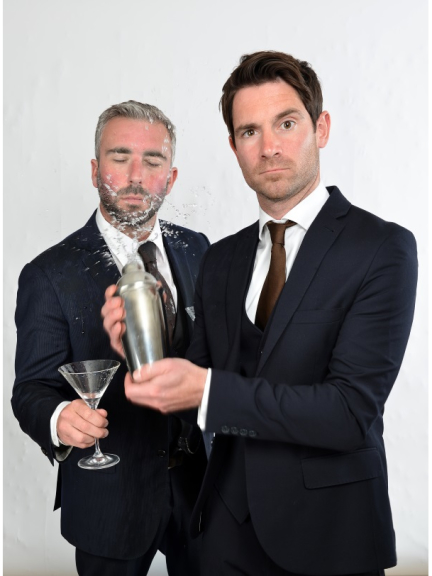 THINKING DRINKERS GUIDE TO THE LEGENDS OF LIQUOR

Ben McFarland and Tom Sandham, award-winning drinks experts, are coming to the Epsom Playhouse on Thursday 6 November with their hit show The Thinking Drinkers Guide To The Legends of Liquor following a fourth consecutive sell-out year at Edinburgh Festival Fringe.

Slide gently onto the bar stool of discovery and savour several free drinks as the Thinking Drinkers explore the liquid lives of history’s most extraordinary elbow-benders and take you on an imbibing adventure that hilariously hails the who’s-who of hooch.

Among the liquid legends you’ll meet along the way are Alexander the Great, Winston Churchill, Humphrey Bogart, Dorothy Parker, Andre the Giant, Jesus Christ and some good ol’ cowboys.

With their catchphrase 'Drink Less, Drink Better', The Thinking Drinkers celebrate the men and women who have used alcohol to light a fire under the rocking chair of moribund ideas rather than those irresponsible imbibers who have given drink its devilish reputation.

When they are not performing the show, Ben and Tom travel the world dispensing spiritual wisdom via their writing for a number of leading titles including Jamie Oliver Magazine, the Daily Telegraph and Time Out. Triple crowned 'Beer Writer of the Year', Ben McFarland's book Boutique Beers (2013) was hailed as “The new book rocking the world for beer lovers" by Metro and Tom Sandham's 2012 coffee table tome World’s Best Cocktails was the Daily Mail's 'Gift Book of the Year'. Imminently their co-authored book - Thinking Drinkers: Enlightened Imbibers Guide to Alcohol - will be published by Jacqui Small.