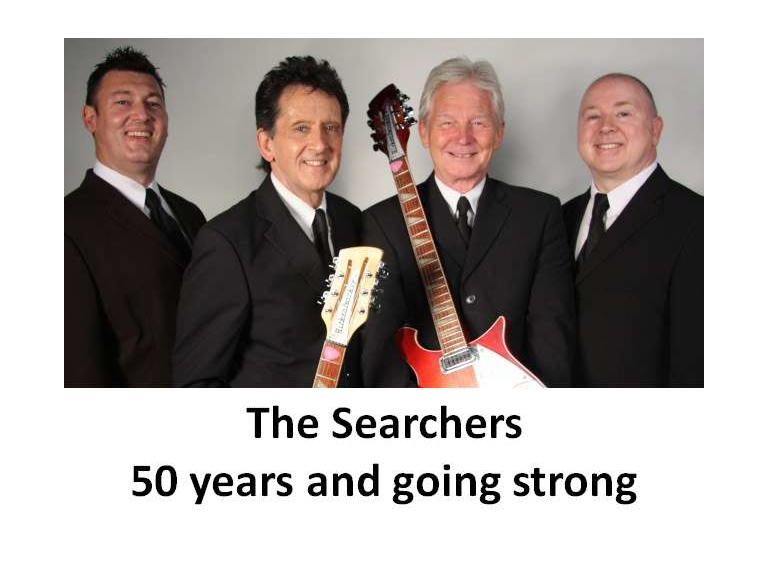 The songs of the Searchers rang through the country with their unforgettable music and lyrics, and they are still going strong after 50 years.

After fifty years of non stop touring exciting things are still happening for The Searchers. 2013 saw them inducted into the Goldmine Hall Of Fame, a fitting tribute from the influential rock magazine in affirmation of their contribution to the world of popular music and in recognition of their influence on so many major artistes.

Surely this must be a precursor to the most prestigious accolade of all, that of induction to the Rock And Roll Hall Of Fame, something that has been too long in coming but which we are certain will happen before long.

And there is more. Still in the discussion stages, there is talk of a brand new album employing the support of some of those international stars who have affirmed their admiration of the band. Alas it`s too early for greater detail but we can wait and hope.

Undertaking a yearly schedule of between 150 and 200 concerts The Searchers are without doubt the hardest working band on just about any circuit. With veterans John McNally and Frank Allen from the golden years of constant hits and these days joined by Spencer James and Scott Ottaway they are still pack leaders in their field today.

With a valuable stock of more than a dozen chart entries, multiple much loved album tracks to choose from and a carefully devised presentation in which the music is embellished by fascinating stories of the triumphs and tribulations along the sometimes rocky way to where they are now they can be considered to be the elder statesmen of Britpop.

What keeps them going? Simple. The love of what they do, the good health to enable them to do it and an amazingly loyal fan base to ensure them of packed out shows all over the U.K and indeed across the continents.

Australia and New Zealand are firmly fixed in their diary every year along with regular visits to far flung places such as The Philippines, The U.S.A, Canada and the far East not to mention hopping over to European destinations with all the ease and comfort of catching the local bus. Las Vegas is once more on the schedule for 2014 as well as other prestigious casino engagements in the States and Canada.

And they have fans in high places. Check out Youtube and you will find The Boss performing When You Walk In The Room in Kilkenny on the final night of his 2013 European tour. It is a song that Bruce has included regularly in his set since his embryonic days and an audio rendition still exists from a seventies appearance at New York`s Bottom Line Club. They even get a credit during the introduction from Bruce on that occasion. It is also the most covered Searchers hit by far.

The Ramones (and how far can you get from the clean cut image of The Searchers?) covered Needles & Pins on an album and Marky Ramone was granted his request to sit in on drums when they played The Cutting Room on West 24th Street in The Big Apple in 2007. Indeed Joey Ramone had already invaded their dressing room with all the excitement and enthusiasm of an ardent groupie at the Lone Star Café several years before during an eighties club tour over there.

Tom Petty, The Birds, Marshall Crenshaw, Paul Carrack. They have all expressed their admiration for those rich harmonies and iconic sounds of the jangling twelve string guitar. When Frank Allen caught a New York appearance by Marshall Crenshaw in Manhattan recently the American rocker was full of detailed questions such as what happened to the monstrous white Burns Bison bass he used on those early American tours. You really do have to be a bit of a fan for your head to be filled with such minutiae.

Speaking of the twelve string guitar which is without doubt the sound most associated with The Searchers, it came as a surprise to many that it was not used on their biggest U.K hit Needles And Pins where the very similar effect was accidentally achieved through an intriguing treble resonance between two six string electric guitars combined with a reverb added during the mixing procedure.

The sound caught the imagination of the public however and the genuine article was however instituted for the recording of When You Walk In The Room and maintained from that point onwards both in their recordings and in their stage show. Founder member John McNally has raised his skill on the twelve string to an art form as can be witnessed on the highly acclaimed Sire recordings made at the outset of the eighties. He in fact owns nine such instruments which include a number of highly prized Rickenbackers, the brand mostly associated with the genre.

There have of course been lineup changes over the years. In an ideal world the same lads who started out on the exciting journey would stay together as friends and musical allies forever but when does that ever happen?

Frank Allen took over from Tony Jackson on August 3rd 1964 giving him an unbelievable forty nine years service so far. His distinctive finger style slapping technique, developed in early 1962 when he was still one of Cliff Bennett`s Rebel Rousers at a time when plectrums were the order of the day on this side of the Atlantic, was much copied by musicians who worked alongside them at Hamburg`s famous Star Club. In fact Steve Priest, the bassist with Sweet, freely admits to copying Frank`s playing manner in his autobiography Are You Ready Steve?

Chris Curtis departed at the end of an Australasian tour in March 1966 and Mike Pender went his own way at the end of 1985 when Spencer James, still a Searcher today after twenty-seven years of service, took over the lead vocals.

The drum stool has seen the most changes with John Blunt, Billy Adamson, Eddie Rothe and now Scott Ottaway taking their turns.

The constant in The Searchers has always been John McNally who founded that little skiffle outfit that first became Johnny Sandon and The Searchers and eventually The Searchers in the Summer of 1962. It is a well known fact that John McNally is an insane workaholic who has astonishingly managed to keep his marriage and home life stable and in place despite the extraordinary demands of the band`s workload.

John McNally and Frank Allen have together maintained the history and reputation over the last three decades as if it was a national treasure which we can suppose in some way it is. It is a heavy responsibility and one which they both take very seriously. The list of hits is impressive and there have been many highlights to look back on with pride.

Hits: Sweets For My Sweet, Sugar & Spice, Needles & Pins, Don`t Throw Your Love Away, Someday We`re Gonna Love Again, Love Potion Number 9 (U.S.A), Sweet Nuthins, When You Walk In The Room, What Have They Done To The Rain?, Goodbye My Love, When I Get Home, He`s Got No Love, Bumble Bee (U.S.A & Australia), Take Me For What I`m Worth, Take It Or Leave It, Have You Ever Loved Somebody.

1963. Sweets For My Sweet gives the band their first of many hits and their first number one in June of that year. Incidentally only six months before they met and palled up with a young Rebel Rouser, Frank Allen, who was to join their ranks very shortly

1964. Forty two concerts over just seven September days at the Fox Theatre in Brooklyn performing alongside Dusty Springfield, Millie, Marvin Gaye, The Supremes, Martha & The Vandellas, Smokey & The Miracles, The Temptaions, The Contours, Little Anthony, The Ronettes, The Shangrilas, The Dovells, Jay & The Americans and The New Beats. Not a cast list to be sniffed at.

1964.  December 29th, performing for and presented to Princess Margaret and Lord Snowdon at The Docklands Settlement Ball at the Savoy, London.

1981. Presented to Her Majesty Queen Elizabeth 11 at the Royal Variety Show on November 23rd at Drury Lane.

1989. Over two days at Wembley Stadium on June 16th and 17th The Searchers supported their friend Cliff Richard playing to 160,000 people in total. It was to be just the first on many shows with Cliff who has continued to be a champion of the band, even joining on vocals with them for a charity show at Wentworth Gold Club in 2004.

2008. Long after their initial chart successes they achieve a silver disc for The Very Best Of The Searchers which reached a very respectable number eleven in the U.K album charts, only being kept out of the top ten by Frank Sinatra.

We could go on but enough is enough. Let us just accept that The Searchers have a glorious history and they have always admitted they feel privileged to not only have made a career out of simply making the kind of music they enjoy but to have that career extend through more than fifty years of constant performing. And their enthusiasm shows in their faces when they are on stage.

In the beginning there were four young lads who loved what they were doing. Now there are four men on stage who still love what they are doing. And there is no end in sight.

The Searchers will be appearing at Epsom Playhouse on April 13th

The SEARCHERS at EPSOM PLAYHOUSE