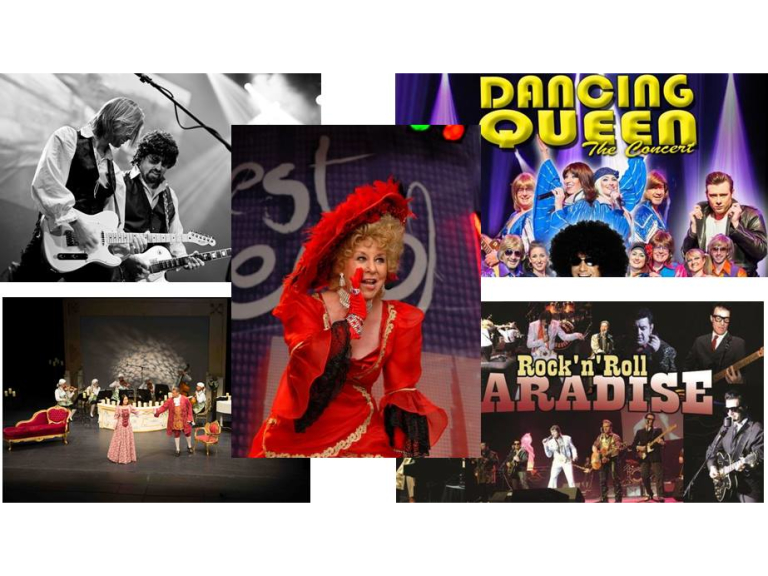 Music always features heavily in the Epsom Playhouse programme and this February is no exception with Music Hall, Mozart, Abba, ELO and rock ‘n’ roll all on this month.

On Tuesday 3 February The Magnificent Music Hall Matinee will take the audience back in time to the glorious and glamorous days of traditional Victorian Music Hall. Two hours of song, dance, magic and laughter superbly presented by this talented line up of artistes, who have all starred in BBC TV's long running series "The Good Old Days". A truly heart warming and memorable afternoon's entertainment.

On Thursday 5 February Magical Mozart by Candlelight is a sumptuous fully costumed show celebrating the wonderful music and the classical baroque world of one of the world's greatest romantic composers Wolfgang Amadeus Mozart. With beautiful settings, costumes and lighting, and of course candles, the European Baroque Ensemble and Singers transport the audience back in a show that includes excerpts from Mozart's Operas such as The Magic Flute, Magic of Figaro, Cosi Fan Tutte and many more.

Dancing Queen The Concert is an action packed party show on Friday 6 February. Featuring all the greatest smash hits from Abba, Grease and the seventies, a fantastic cast of singers and musicians perform the ultimate party night that will have the whole family dancing in the aisles! Featuring Abba classics such as Dancing Queen, Waterloo, Mamma Mia, Knowing Me, Knowing You, and Thank You For The Music, along with the biggest ‘70s hits like Summer Nights, Grease Lightning, You’re The One That I Want, Car Wash, YMCA, Boogie Nights and Love is in the Air.

Back by public demand The ELO Experience will be recreating the incredible live performances of this supergroup on Friday 13 February. The legacy left by Jeff Lynne and The Electric Light Orchestra went on to become the soundtrack of our lives. The ELO Experience are the world's foremost tribute to this great band. With a stunning light shows and large screen projection to further enhance the experience, this incredible show accurately reproduces the songs and sounds.

On Saturday 14 February Rock ‘n’ Roll Paradise is the show that never happened in the golden era of rock and roll, but delivered with all the flair of a 21st century live concert. Elvis Presley, Jerry Lee Lewis, Buddy Holly, Roy Orbison, the Big Bopper and Eddie Cochran join each other on stage for this musical extravaganza. Rock ‘n’ Roll Paradise has something for everyone in this feel-good, two hour celebration of the magic of rock and roll, with over 40 songs packed into this roof raising critically acclaimed show.

Tickets are on sale now www.epsomplayhouse.co.uk or by calling the Box Office on 01372 742555. You can also request a copy of the new season brochure.