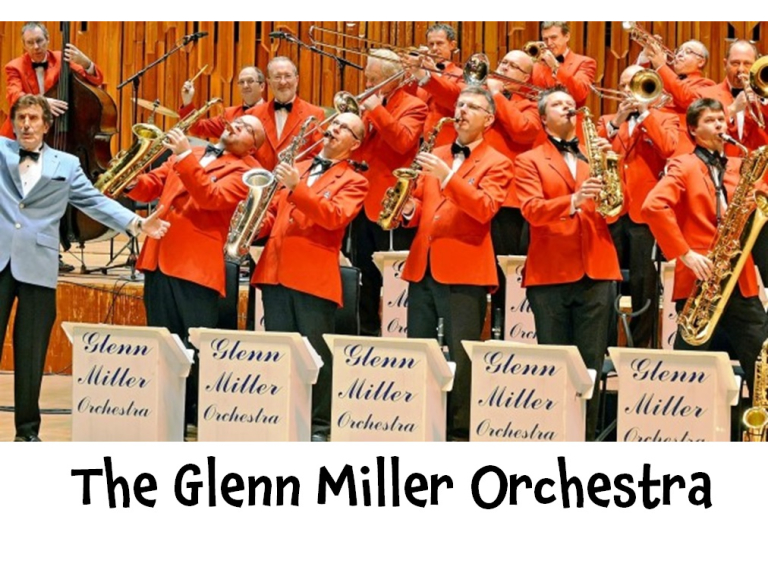 2014 marks the 70th anniversary of Glenn Miller’s all-too-short stay in UK. He came here in July 1944 to support the troops involved in the invasion of Europe. From July to December he cemented his reputation which, at the time, was second to none in the world of musical entertainment and which has lasted to this day. On December 15, 1944, Glenn boarded a single engine C-64 Norseman aircraft to travel to Paris, France where he was to make arrangements for a Christmas broadcast. Tragically, the plane never reached France and was never found.

The current UK band was put together in 1988 by veteran musical entertainer Ray McVay in conjunction with Glenn Miller Productions in New York. McVay, previously best known as musical director for the original Come Dancing series on BBC, approached the offices of the Glenn Miller estate 25 years ago seeking an arrangement to operate a Glenn Miller Orchestra in UK

Since then, over the last quarter of a century, this great orchestra has built itself into something of an institution as it tours the top provincial venues in the country as well as satisfying a demand for Miller’s music in Europe, Asia and South America.

And on Monday, 1st December, the Glenn Miller Orchestra led by Ray McVay will be In the Mood for Christmas at the Epsom Playhouse, curtain up at 7.30pm.

The show features the fabulous harmonies of the Moonlight Serenaders, the sublime vocals of Catherine Sykes and Colin Anthony as well as Ray Wordsworth with the swinging jazz band, The Uptown Hall Gang. And with Christmas approaching, the orchestra will be dusting off the Yuletide music and playing Glenn Miller's original arrangements of Christmas favourites such as I'll be Home for Christmas, Have Yourself a Merry Little Christmas and White Christmas.

Back in the late ‘30s–early ‘40s, Glenn Miller packed the dance halls in the States. The band enjoyed a string of hits like “Tuxedo Junction”, “Moonlight Serenade”, “Chattanooga Choo Choo” and the iconic “In the Mood” - and seventy years later, they sound just as good! After that fateful night in December 1944, exactly 70 years ago, Glenn was gone. But as far as UK music-lovers were concerned, a special relationship had been forged between them and Glenn Miller and his music – a bond that continues to this day.