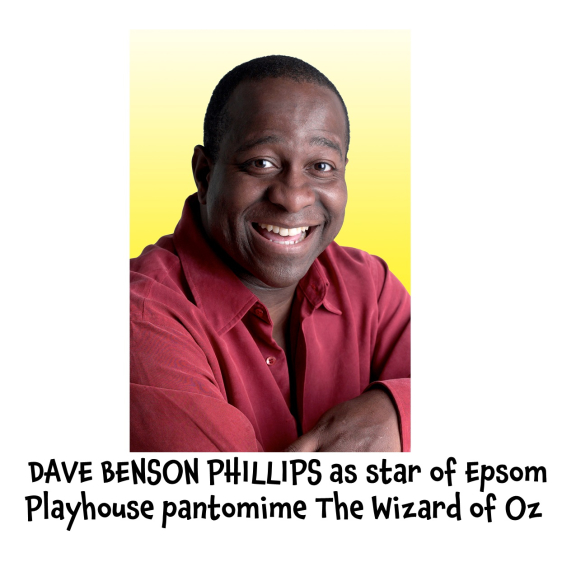 Legendary children’s entertainer DAVE BENSON PHILLIPS has been announced as the star of this year’s Epsom Playhouse pantomime The Wizard of Oz where he will be playing the part of the Scarecrow.

Most children in the UK have enjoyed being entertained by Dave Benson Phillips who, over the last 28 years, has become one of the most popular children’s presenters on television. His big break into television came when he has working at Haven Holidays as a Children’s Uncle. He was spotted by the BBC and given the chance to appear in Playbus, which later became Playdays, a programme that ran successfully for many years.

This led to Dave being given his own show by the BBC, the phenomenally popular BAFTA nominated Get Your Own Back, of which there have now been 14 series. He was given another major series in 1996, this time for ITV, called Disney’s Wake Up in The Wild Room, which was aired every Saturday morning for nearly two years.

Dave is very well known for starring in the best selling Fun Song Factory video series, which was televised for ITV. He has also presented numerous other television programmes including the

CITV series Petswap, co-presented by Fearne Cotton, Nick Jnr for Nickelodeon and Words and Pictures and Go For It for BBC Education. Dave is hugely well known for his work on the Disney

Dave has continued to perform to live audiences throughout his career, including touring with Get Your Own Back – Live! and The Dave Benson Phillips Show, plus one of his proudest moments, singing at the London Palladium as part of the Children’s Royal Variety Performance.

Throughout his hectic schedule Dave has always found time for children with special needs, amongst whom his Makaton sign language video is extremely popular.

In 2014 Dave is voicing Dr Woof in the new CBeebies flagship animation BOJ, also featuring Jason Donovan and this summer appeared on Celebrity Pointless on a special children’s presenters edition.