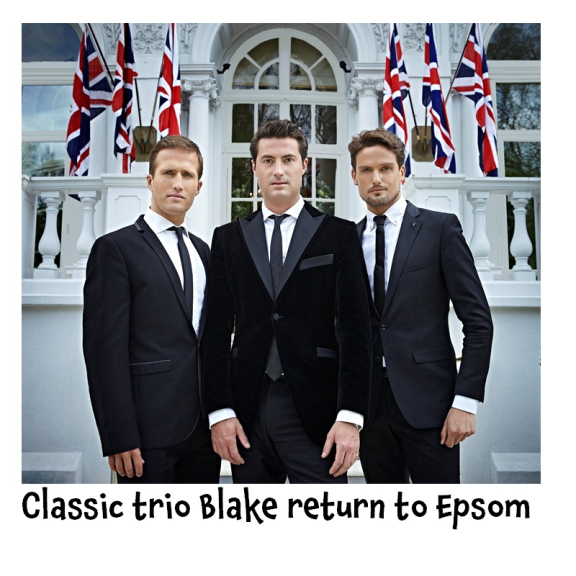 Vocal trio BLAKE return to the Epsom Playhouse on Friday 17 October with their ‘Live In Concert’ tour for 2014. The popular trio will provide an evening of great music and entertainment from these singers whose stunning harmonies and rat-pack banter have been entertaining audiences around the world. As well as classic songs from their three previous chart-topping and award-winning albums BLAKE are looking forward to performing songs from their latest album ‘Start Over’.

BLAKE’s most recent album ‘Start Over’, is a beautiful collection of contemporary harmony pop featuring stunning original songs and a few carefully selected covers, including Paul McCartney’s ‘Beautiful Night’ and Bob Dylan’s ‘Make You Feel My Love’. Having formed in 2007, recording and performing as a classical group, ‘Start Over’ is BLAKE’s first pop album and sees them embracing the challenge. The change in musical direction is in fact a natural progression for BLAKE. Inspired by great vocalists such as the Bee Gees, Boyz II Men and The Beach Boys, and having toured almost continually since 2009’s ‘Together’ (their third album), BLAKE’s live set list has expanded to include more and more contemporary material. The group discovered that the strength of their vocal arrangements and four part harmonies allowed them to interpret a widening range of songs and the reaction from their audiences reinforced their belief that they were creating something special.

BLAKE’s worldwide status continues to grow as the band take their music to important new territories and return to the Philippines where they are hugely popular. Their third album ‘Together’ topped the charts in the country last year and the group are putting the finishing touches on a new album specifically for the Philippines including a number of tracks sung in Tagalog, one of the Philippines’ predominant languages.

Please note the line up is subject to change and the show is suitable for over 16 year olds only.