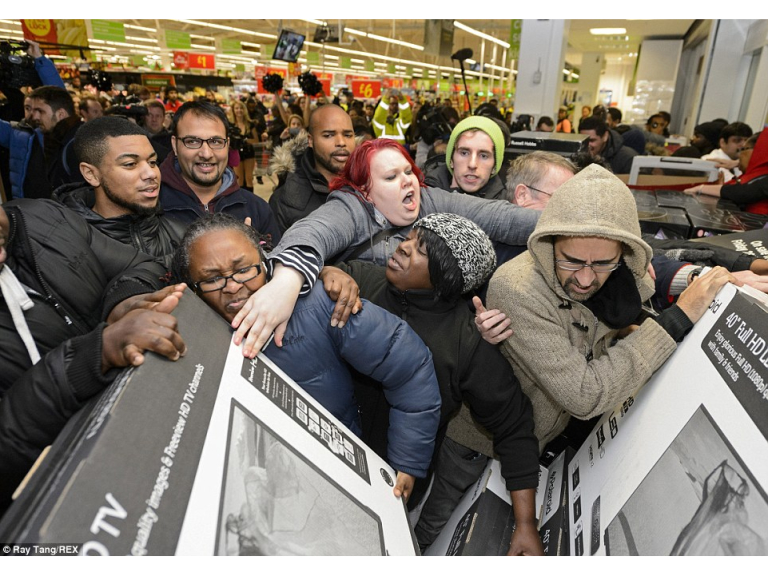 What is Black Friday?

Well (apparently) it's the day following Thanksgiving Day in the United States, when retailers open up early in the morning (and even overnight) for a day of frantic sales. A bit like our Boxing Day sales but with a lot more flying elbows and fists! It will take place this week on Friday 27th November.

How did it get its name?

The word "black" has traditionally been used to describe days which saw major stock market crashes, or other days of economic woe, but it was first used more than 50 years ago by police officers in Philadelphia. They used it to describe the chaotic day one year, which saw the city overrun with shoppers the day after Thanksgiving, combined with American Football fans travelling to see the annual Army v Navy game.

Retailers tried to rename the day "Big Friday" but without success.

Another theory is that the name comes from the day when many retailers, which might not have made a profit all year long before the Christmas trading period, move from the red into the black.

Is it big in Europe too?

No, nowhere near, but it’s bigger in the UK than anywhere else in Europe. Sales in the UK account for two-thirds of Black Friday sales across Europe. It’s estimated that Britons will spend £966 million online during that one day.

Why does the UK have Black Friday when we don’t even have Thanksgiving?

Hmmm, good question. Black Friday first arrived here in 2010, thanks largely to US company, Amazon. They thought they’d try to export it to this country to see if it could increase sales. Then in 2013, Asda (owned by US firm Walmart) jumped onto the bandwagon and were then followed in 2014 by most of the UK’s major retailers, including Marks and Spencer, John Lewis and Argos.

And did it work?

Well, kind of.  Last year, Black Friday saw British shoppers spend £810 million on online purchases alone – which works out to be over £9,000 per second! But events on the high street weren’t so well received. Shoppers desperately knocked each other to the ground and trampled over each other in their efforts to be the first inside shops, police were called to control crowds and break up scuffles and shoppers were described as behaving like animals!

The scenes were so deplorable that one MP criticised retailers in the House of Commons, accusing them of enabling public disorder and wasting police time. Jeremy Corbyn agreed and urged UK retailers not to hold Black Friday sales ever again.

But having said that, Black Friday has already becoming the biggest shopping day of the year, eclipsing even the Boxing Day sales. Internet sales in the UK are expected to exceed £1 billion for the first time in history. Ebay expects to see 9 million Brits visiting its website on Friday, with 25 items sold every second.

Who knows? Whilst the British public love a bargain, we’re also known the world over for our love of orderliness and queuing. Asda, which helped to promote the event only a few years ago, has now decided to steer clear. Last year, the supermarket  sent shoppers into a frenzy by offering one-day-only special deals which created scenes of chaos as bargain-hunters fought to get their hands on discounted goods. Asda said that their customers didn’t want to be held hostage to the event and said that shoppers had become tired of the whole experience.

The Top Private Schools In Edinburgh
Sign up for offers
Sign up for what's on guide
Popular Categories
By clicking 'ACCEPT', you agree to the storing of cookies on your device to enhance site navigation, analyse site usage, and assist in our marketing efforts.
For more information on how we use cookies, please see our Cookie Policy.