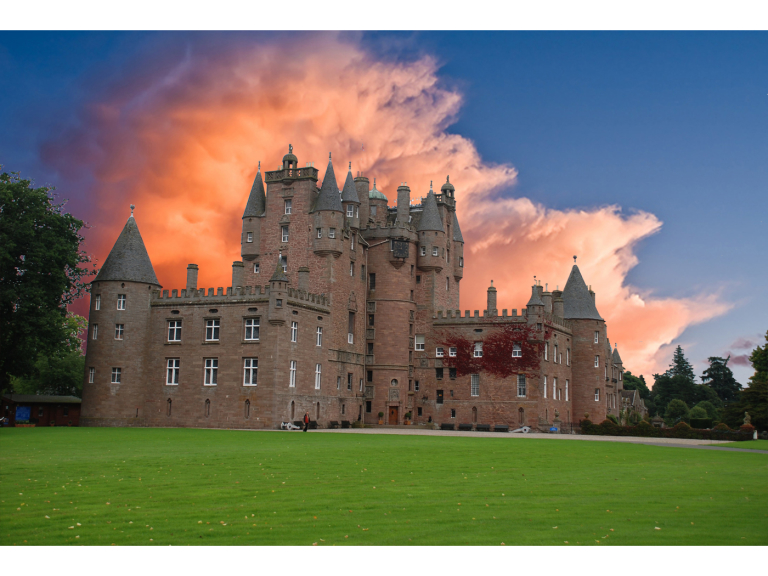 It’s the eve of Halloween and tomorrow, a large party will be held at Glamis Castle to celebrate all things spooky. But, do the guests know what they have let themselves in for? Are they familiar with the resident ghosts that haunt Glamis Castle – deemed one of the most haunted locations not only in Angus, but the entire British Isles?

The accounts of ghost sightings at the home of the late Queen Mother are countless, but some ghosts seem to appear more often than others…

The ghost of Janet Douglas (Lady Glamis), a woman burned at the stake back in 1537 after being falsely accused of dabbling in witchcraft and plotting to poison the king, is said to haunt the Glamis Castle family chapel. Those who have witnessed the presence of the Grey Lady claim to have heard knocking and have felt an overwhelming air of sadness in the chapel room. The Grey Lady is most often sighted kneeling in front of the chapel altar praying.

The Woman with No Tongue

The most heavily reported ghost at Glamis Castle, the woman with no tongue is often seen wandering the castle grounds pointing to her badly wounded face. She has also been spotted gazing out of a barred window within the castle. It is not clear who the spirit is or what happened to her, all those years ago.

Always seen sitting on a stone seat outside the Queen’s Room is the ghost of a quiet, young servant boy.

The Ghost of Earl Beardie

Allegedly a cruel and twisted man, the Earl Beardie was a heavy drinker who liked to play cards. Children have reported seeing his dark figure standing over their beds during the night. Others have heard him stamping the floor, sometimes swearing is heard and even the distant rattle of a dice.

Once upon a time, a servant woman at Glamis Castle was caught sucking the blood of her victim. Legend dictates that upon being caught, she was walled up alive in a chamber, where she waits to be freed once again.

A rumour began in the 1700’s that Glamis Castle had a dark secret, hidden within a dark room. A secret so awful that only the Lords of Glamis their heirs and stewards were entitled to know. Many refused to acknowledge the existence of the room through fear that they might lose their sanity, in the knowledge of what was inside…

Interestingly, a few years ago, a crowd attending a party at Glamis Castle decided to search for the missing room. They did so by placing towels on all the castle windows they could find. They then went outside only to discover that one window did not have a towel in place. The location of said room and how to find it, remains a mystery to this very day.

Halloween in Dundee and Angus
To see the businesses in our Halloween section, please click here.
Latest Articles