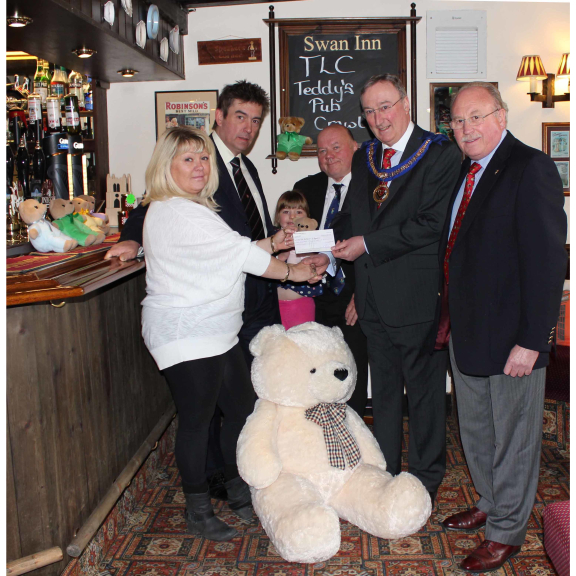 A warm welcome is assured at Swan Inn in the rural village of Wybunbury from Land Lady Lesley Coop and on Friday 10th April a cheque for £410 was presented to George Mann who is an Assistant Provincial Grand Master in the Masonic Province of Cheshire.

The Pub regularly holds Charity Fund raising events and when celebrity Chef Simon Rimmer of Greens Restaurant in West Didsbury took a break from hosting Channel 4 ‘Sunday Brunch’ and BBC 1’s ‘Saturday Kitchen’ to cook a three course fish dinner for Charity at the Swan Inn, locals and Freemason’s Marshall Nield and Paul Moody members of Four Cardinal Virtues Lodge No. 979 which meets at The Masonic Hall, Willaston, persuaded Lesley Coop to present the proceeds of the meal and a raffle to the Freemasons TLC (Tender Loving Care) Appeal.

The TLC Appeal purchases 10” high multicoloured Teddies which are donated to distressed or particularly brave children in Hospitals Paediatric A & E Departments in Cheshire to date 20,000 teddies have been given for the children to take home since August last Year, nationally over 1 Million TLC teddies have been donated.

The Swan Inn under Lesley Coop is continuing its charitable fund raising and is successfully combining jovial hospitality with generosity, to its local Community.