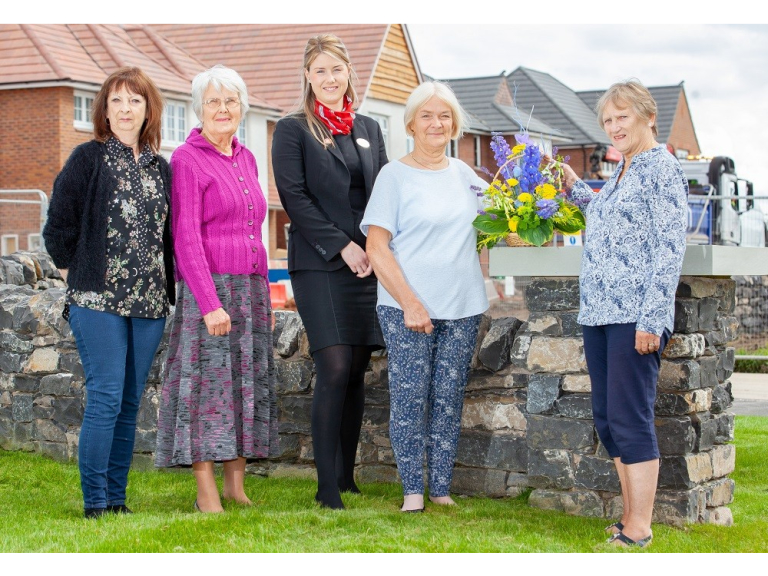 Everything's coming up roses for Penyffordd Flower Club thanks to a generous and much-needed donation from Redrow.

The Flower Club meets once a month at the War Memorial Institute in Penyffordd, where the builder is creating a community of 186 homes – 27 of them affordable - within its new Millstone View development.

Redrow has donated £500 to Penyffordd Flower Club from its Millstone View Community Fund, giving a welcome boost to the organisation which goes back almost four decades.

Former chair and committee member Christine Cunnah explained: “The Flower Club was founded in 1982 by local people – and several of the original members still attend.

“We meet every month but are struggling due to increased costs, not least those of flowers since Brexit.  We have already reduced the number of demonstrators we have to cut costs because many members, some of whom are in their 80s and 90s, are unable to pay extra fees out of their already stretched pensions.

“We support many other community organisations and groups like the Brownies, local school and the church, and we would hate to think of having to close down because of lack of funds – especially because for many it’s not just a flower club, it’s a time and place to socialise, somewhere to catch up on news and meet friends.”

Christine added: “We are very grateful for the donation which will really help us.”

Redrow has shared a voluntary community fund of £10,000 for groups and good causes in Penymynydd and surrounding villages, with 14 projects selected to benefit.

Caroline Thompson-Jones, area sales manager for Redrow, said she was delighted to be able to support such a group: “It’s wonderful that we can help the Penyffordd Flower Club.

“Groups like this play a vital role in communities and prove that it’s not just the younger members who can contribute to society. Communities flourish and benefit when everyone is involved, both young and old, and this shows that everybody matters and has a role to play.”

Issued for & on behalf of Redrow Homes by Active PR