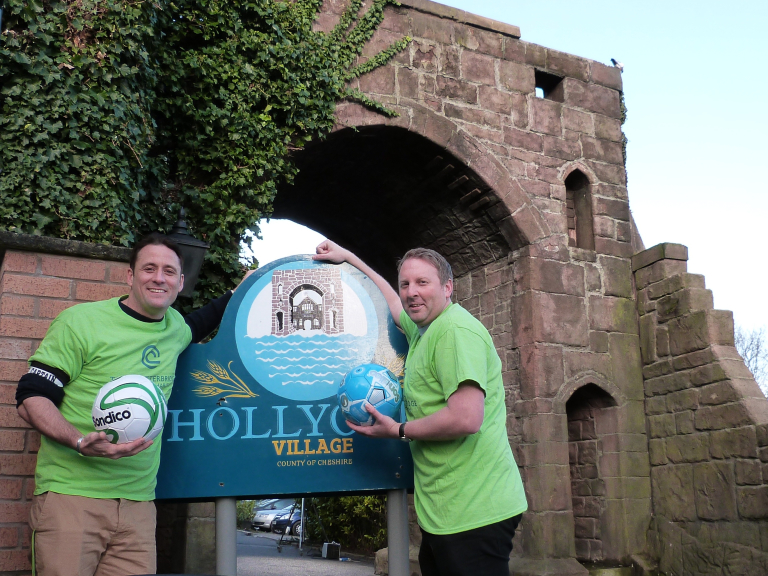 This spring, staff from Flextronics Warrington will go head-to-head with famous faces from the Hollyoaks cast in a charity football match.

On April 30, a team from the supply chain solutions specialists will lace up their boots and take to the pitch at Millbank Stadium, home of Runcorn Linnets FC, to test their skills against some of stars of the popular Chester-based soap to raise money for The Clatterbridge Cancer Charity.

Warrington Town FC Manager, Shaun Reid, will be putting team Flextronics through their paces in the weeks leading up to the game in a range of training sessions and has offered to get his boots dirty and play for them on the day.

Longest serving Hollyoaks cast member Nick Pickard, who has played Tony Hutchinson in the soap since it launched in 1995, is the frontman of the fundraising event, along with Flextronics’ MRO Buyer, Joe Hitchmough.

Joe, the event organiser, said: “We wanted to do something family-friendly and fun which would raise money for Clatterbridge, so we came up with the idea of a charity football match and hoped that we could get some local celebrities to take part.

“I’d like to thank everyone who is donating their time and resources to this project. A lot of people have a great deal of affection for Clatterbridge at Flextronics and it holds a special place in the hearts of some of my colleagues. We also have some huge Hollyoaks fans, so there’s a lot of excitement around the match.”

The game kicks off at 7.30pm (gates open 6.30pm) with commentary from WireFM. The Golborne Brass Band will also be on hand to introduce the teams and a half -time performance will take place from dance group, Wigan Surpreme Starlights Cheerleaders.

All profits raised will be donated to The Clatterbridge Cancer Charity, which has nine operating sites across Cheshire and Merseyside and is one of the largest networked cancer centres in the UK.

Jade Barrett, Area Fundraising Manager at The Clatterbridge Cancer Charity, added: “We are so grateful to our friends at Flextronics for organising the game, and to Nick for donating his time with colleagues at Lime Pictures. The event will support Clatterbridge cancer patients from North Wales, Cheshire, Wirral, Merseyside, Lancashire and the Isle of Man, helping us fund vital cancer research projects, equipment and support services that would otherwise be unavailable.

“We treat over 30,000 patients each year; we cannot thank the two teams and everybody buying tickets enough for their support, you are making a huge difference to the lives of local cancer patients.”