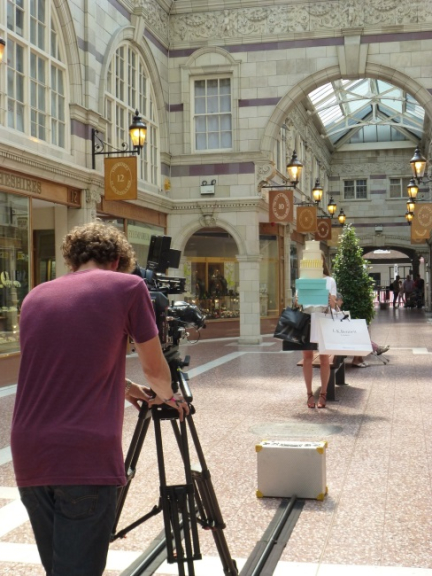 Marketing Cheshire is making history with the release of Chester's first ever made-for TV commercial.

It portrays a fresh contemporary image for the City to attract more visitors, media coverage and inward investment and help boost the local economy.

The ground-breaking commercial has been filmed by award-winning director Steve Daniels, with an outstanding track-record of TV credits. Marketing Cheshire cast several local people to appear in the new film that features several well-known locations around the city-centre, including the Eastgate Clock, the Cathedral, the River Dee, the Racecourse and the Old Dee Bridge.

The new made-for-TV commercial also features The Chester Grosvenor, The Queen Hotel, Oddfellows, Grosvenor Shopping Centre and Doubletree by Hilton and aims to capture Chester as a classic, contemporary city.

Fashion retailer LK Bennett and Roman Tours appear in the promotional film, too. The film emphasizes the City's Roman origins and 2000 years of heritage as a backdrop to enjoying a host of 21st century delights on a short break including designer shopping, soothing spas, fine dining and leisure activities.

Marketing Cheshire are planning to use the film material to create a short promotional film with the potential to reach a global audience through terrestrial, satellite and social media channels.

The agency is also planning to persuade partners and national tourist boards to use their own channels to showcase the new city movie. In addition, Marketing Cheshire has captured what goes on behind the scenes to create a made-for-TV commercial and has retained any outtakes for people to enjoy!

Chief Executive of Chester Renaissance, Rita Waters says: "We applaud Marketing Cheshire's innovative approach to promoting the city of Chester to a worldwide audience. Attracting visitors, the media and investors to a destination is a highly competitive business and we need to find new opportunities to get the message across that Chester is not just a great heritage destination, it's also a classic, contemporary city with its own distinctive brand".

Christophe Hesbert, Chairman of Chester & Cheshire Hoteliers Association says: "Getting TV coverage for Chester is top of our wish-list for the city. We are delighted with the way that Marketing Cheshire are positioning Chester for a global audience and will be working hard with the agency to make sure that the made-for-TV commercial gets the maximum coverage possible and inspires visitors, the media and major investors to come here".